An all-Australian third-round showdown is set at the Paris Masters, with James Duckworth to meet Alexei Popyrin. 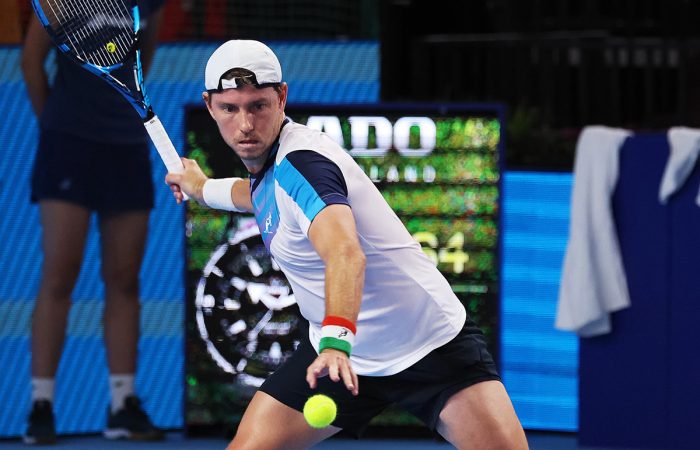 James Duckworth’s stellar form is continuing at the Paris Masters.

The 29-year-old Australian moved into the third round with a 6-3 3-6 6-3 victory against rising Italian teen Lorenzo Musetti at the ATP Masters 1000 tournament.

World No.55 Duckworth served 11 aces and was only broken once in a two-hour and four-minute clash.

This is Duckworth’s 21st tour-level victory of the season and his 14th win from his past 19 matches. It also matches Duckworth’s career-best result at ATP Masters 1000 level, having advanced to the third round at Miami and Toronto as well earlier this season.

Duckworth now plays fellow Australian Alexei Popyrin for a place in the quarterfinals.

Popyrin, who snuck into the draw as a lucky loser, was leading 4-2 when world No.3 Stefanos Tsitsipas retired in their second-round match with a right arm injury.

It is only the second time during his career that 23-year-old Tsitsipas has retired mid-match.

“It’s not easy to just stop,” Tsitsipas said. “It hurts a lot not to be able to play at the level that I’m expected to play.”

This also matches world No.71 Popyrin’s career-best result at ATP Masters 1000 level, with the 22-year-old making third round appearances at Miami and Madrid earlier this season too.

Duckworth and Popyrin have met twice before, splitting results.

Popyrin won their most recent meeting, in a qualifying match at Tokyo in 2019, and has also won six of his past seven matches against a fellow Australian, which includes a first-round victory against Alex de Minaur this week.

Duckworth also has a good record against Aussie opponents, winning four of his past five encounters.

For the winner of their third career showdown, a first ATP Masters 1000 quarterfinal is the reward.

John Peers and Slovak partner Filip Polasek are already through to the doubles quarterfinals in Paris, advancing with a 7-6(2) 6-4 victory against Serbian wildcards Novak Djokovic and Filip Krajinovic.

The sixth-seeded duo are one of the most in-form teams on tour, having won 15 of their past 18 matches.