Proud to be wearing the green and gold, the Australian Billie Jean King Cup team is excited to begin its finals campaign today. 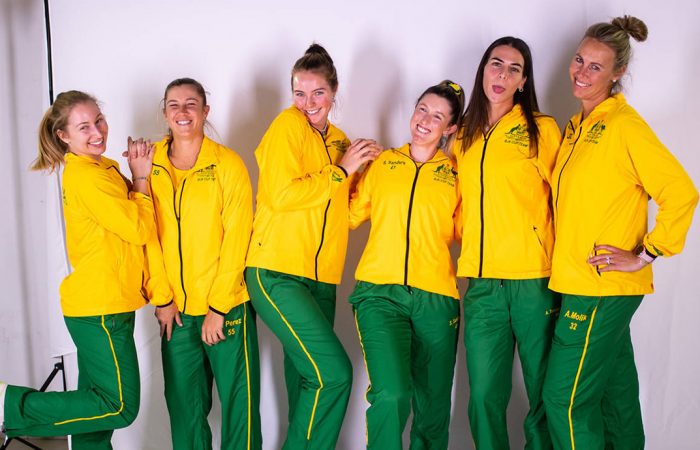 Belgium have fielded a strong team again, led by world No.18 and the world’s top-ranked doubles player Elise Mertens.

After scoring a 2-1 win against Belarus yesterday, Belgium can secure victory in the round-robin stage and seal its progression to the knock-out semifinals by beating Australia.

Alicia Molik, who played in Australia’s last meeting with Belgium in 2002, is now team captain. Acknowledging a strong Belgium line-up presents a challenge, Molik also believes rankings are not a factor in the Billie Jean King Cup competition.

“That’s what playing for your nation does to people, no matter how good you are, you still have the ability to produce something really, really special,” she said.

Molik is backing her Australian side, which she believes features a perfect mix of experience and youth.

After career-best seasons, Ajla Tomljanovic and Storm Sanders headlined an Australian team that also includes debutantes Ellen Perez and Olivia Gadecki. The returning Daria Gavrilova, who has been sidelined with injury since February, has also been selected.

“We’ve got a really abundant team,” said Molik. “That’s probably what I can say about our team.”

The tie, which consists of two singles and one doubles rubber played across a single day in a newly-introduced format, begins at 8.30pm AEDT. It is broadcast live on 9Go! in Australia.