US Open 2021: Aussie women leading the way on day six

Ash Barty and Ajla Tomljanovic are among five Australian players competing on day six at this year's US Open. 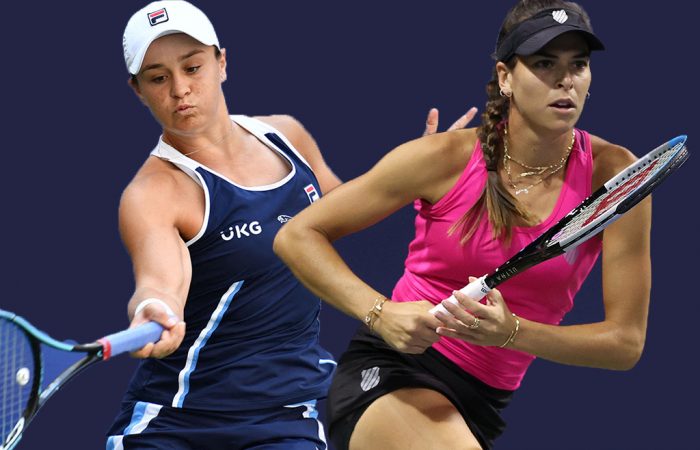 Two Australians – Ash Barty and Ajla Tomljanovic – have advanced to the third round in the US Open women’s singles competition.

The last time this happened was 2003, when Alicia Molik and Nicole Pratt reached that stage.

This is familiar territory for Barty, with the world No.1 progressing to the third round in 12 of her past 14 Grand Slam appearances. It is also the fourth time she has done so in New York.

However for Tomljanovic, this is a new experience. The 28-year-old had never progressed beyond the second round in seven previous visits to Flushing Meadows.

It follows Tomljanovic’s sensational Wimbledon 2021 quarterfinal run, which was only the second time in 27 Grand Slam appearances she had progressed further than the second round.

“I think a few things have clicked in my mind, which is that I believe I can compete with the best, and actually win,” she said after eliminating world No.32 Petra Martic in the second round.

“In the past I believed, but when it came down to it, there was always more doubt creeping in when pressure situations would arise. Now I feel like I have a plan when I go out there and believe I can execute it – and that’s been the biggest thing that’s shifted.”

Should Barty and Tomljanovic continue their winning runs on day six, it would mark the first time since 1979 that two Australian women have reached the US Open fourth round.

Australians in action on day six:

Ajla Tomljanovic (AUS) v [4] Karolina Pliskova (CZE)
Women’s singles, third round, Grandstand, third match (not before 5am AEST)
In her eighth US Open appearance, Tomljanovic has advanced to the third round for the first time. The world No.46’s growing confidence, especially under pressure, was evident in a steely second-round win against No.30 seed Petra Martic. It was her first victory over a seeded opponent in New York – and now the 28-year-old is targeting a second. There is also the added challenge of trying to score a first top-10 win at a Grand Slam since Roland Garros 2014. The 29-year-old Pliskova is currently ranked No.4, but has been as high as No.1 and was a US Open finalist in 2016. They have had some close battles in the past, however Tomljanovic’s only win against the big-serving Czech was more than a decade ago – when both were ranked outside the top 100.
Head-to-head record: Pliskova leads 5-1
Last meeting: Pliskova won 6-4 6-7(5) 6-1 (Brisbane 2020)

[1] Ash Barty (AUS) v Shelby Rogers (USA)
Women’s singles, third round, Arthur Ashe Stadium, night session, first match (from 9am AEST)
Although Barty has won 14 of her past 15 matches and not lost a set this week in New York, she still sees room for improvement. “Some work to do, but we are pleased to be able to go through and get another opportunity,” she said after her second-round win. Barty is looking to match her career-best result at the US Open and advance to the fourth round for the third time. Standing in her way is a familiar opponent. This is the 25-year-old’s fifth meeting with world No.43 Rogers this season – and their sixth in total. Barty has won each of their previous meetings, but has twice been extended to three sets. The world No.1 admits playing the 28-year-old American, who was a quarterfinalist in New York last year, is “always a very big challenge”.
Head-to-head record: Barty leads 5-0
Last meeting: Barty won 6-2 6-1 (Madrid 2021)

[10] Storm Sanders (AUS)/Caroline Dolehide (USA) v Irina-Camelia Begu (ROU)/Andreea Mitu (ROU)
Women’s doubles, second round, Court 12, first match (from 3am AEST)
Contesting their first tournament together since reaching the Wimbledon semifinals in July, 27-year-old Sanders and 22-year-old Dolehide continued their impressive form to lose only three games in the first round. Now the No.10 seeds play a Romanian duo – 31-year-old Begu is ranked No.73 and 29-year-old Mitu is ranked No.97. World No.41 Sanders, who recently became Australia’s top-ranked woman in doubles, is already enjoying a career-best run in New York and is aiming to reach a Grand Slam third round for only the second time.

[Alt] Ellen Perez (AUS)/Marcelo Demoliner (BRA) v [WC] Madison Keys (USA)/Bjorn Fratangelo (USA)
Mixed doubles, first round, Court 5, second match
Perez makes her US Open mixed doubles debut as an alternate alongside Brazilian Marcelo Demoliner, replacing late-withdrawing Kazakh pair Elena Rybakina and Andrey Golubev in the draw. The 25-year-old Australian is ranked No.46, while 32-year-old Demoliner is ranked No.51. Their opponents are wildcards – and partners both on and off the court. The 26-year-old Keys, a former top 10 singles player, is playing mixed doubles for only the third time in her professional career. This is first time she has played with 28-year-old Fratangelo, who she has been dating since 2017.

[Alt] Dayana Yastremska (UKR)/Max Purcell (AUS) v Gabriela Dabrowski (CAN)/Marcus Daniell (NZL)
Mixed doubles, second round, Court 11, fourth match
Purcell and Ukrainian Yastremska snuck into the draw as alternates – but proved they are contenders with an impressive win against the experienced team of former world No.1 Sania Mirza and world No.7 Rajeev Ram in the opening round. Now the 23-year-old Australian, who is ranked No.42, and 21-year-old Yastremska face another tough duo in the second round. World No.11 Dabrowski is a two-time Grand Slam mixed doubles champion, while world No.43 Daniell claimed an Olympic bronze medal in doubles at Tokyo 2020 last month.