US Open 2021: Five Aussies to compete on day one

Five Australian players are scheduled to play their opening-round singles matches on day one of the US Open. 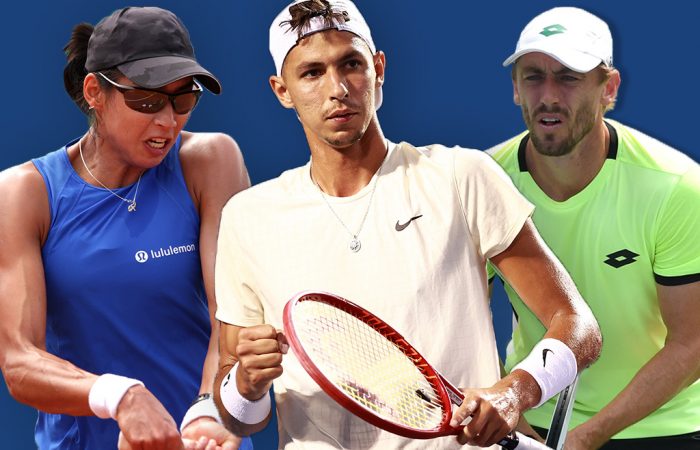 The final Grand Slam tournament of the season begins in New York today – and we have five Australians featuring on the day one schedule.

Aussies in action on day one:

John Millman (AUS) v [Q] Henri Laaksonen (SUI)
Men’s singles, first round, Court 15, first match (from 1am AEST)
Memories of a career-best US Open quarterfinal run in 2018 are sure to spur Millman on as he makes his seventh consecutive main draw appearance in New York. The hard-working 32-year-old Australian, who is presently ranked No.43, faces Swiss qualifier Laaksonen in the opening round. It is his second career meeting with the world No.130 – and first in more than nine years. Millman, who is looking to record his first Grand Slam singles win of the season, has withdrawn from his past two tournaments with a foot injury. The 29-year-old Laaksonen, on the other hand, is riding valuable momentum after winning 18 of his past 22 matches.
Head-to-head record: Millman leads 1-0
Last meeting: Millman won 6-2 7-5 (Caloundra 2012)

James Duckworth (AUS) v Pedro Martinez (ESP)
Men’s singles, first round, Court 14, second match
This is a battle between two players who have recently achieved new career-high rankings. Duckworth posted two top-40 wins to reach the Canadian Masters third round earlier this month, helping the 29-year-old Australian rise to world No.67. While Martinez peaked at world No.73 after making his first tour-level final on Austrian clay in late July. Duckworth, who is making his sixth US Open main draw appearance, is much more comfortable on hard courts than the 24-year-old Spaniard, whose best results have been on clay. Martinez has a 5-2 career record in Grand Slam first-round matches, but is yet to score a main draw win in New York.
Head-to-head record: First meeting

> READ: Seven Australian men to compete at US Open

Alexei Popyrin (AUS) v Radu Albot (MDA)
Men’s singles, first round, Court 14, third match
Popyrin is starting to build some impressive form, scoring a confidence-boosting three wins in Winston-Salem last week. It followed a challenging stretch for the big-hitting world No.73, who struggled to maintain his momentum after claiming a maiden ATP singles title earlier in the season. The 22-year-old Australian, who is making his second US Open main draw appearance, faces world No.108 Albot in the opening round. Although Albot has been ranked as high as No.39, the 31-year-old Moldavian has scored only two wins from his past 10 matches and also has a 1-6 career win-loss record in US Open first-round matches.
Head-to-head record: First meeting

[Q] Astra Sharma (AUS) v [8] Barbora Krejcikova (CZE)
Women’s singles, first round, Court 11, fourth match
After earning her main draw spot through qualifying, Sharma has been dealt a difficult first-round draw. The 25-year-old from Perth faces No.8 seed and reigning Roland Garros champion Barbora Krejcikova. The 25-year-old Czech player has won 27 of her 31 singles matches since May, helping her sensationally skyrocket from world No.40 to inside the world’s top 10. Krejcikova is, however, making her main draw debut in New York and has lost in qualifying in her past five visits. World No.114 Sharma is enjoying a breakthrough season of her own, claiming a first WTA singles title in April. She is now aiming to record a first main draw win in New York, as well as a career-first top-10 win.
Head-to-head record: First meeting

Nick Kyrgios (AUS) v [18] Roberto Bautista Agut (ESP)
Men’s singles, first round, Louis Armstrong Stadium, night session, second match
Kyrgios has been handed a tough draw in his eighth US Open appearance, pitted against world No.21 Bautista Agut. The 33-year-old Spaniard is a consistent competitor and been ranked as high as No.9. Kyrgios never shies from a challenge though, and has won three of his past six matches against seeded opponents at major tournaments. However, the 26-year-old Australian, who is currently ranked No.86, has been struggling with a knee injury and has lost his past three matches on tour. Both boast impressive first-round records in Grand Slam first-round matches – Bautista Agut’s win-loss record is 29-5, while Kyrgios’ stands at 21-6.
Head-to-head record: Tied at 1-all
Last meeting: Bautista Agut won 6-1 6-4 (ATP Cup 2020)