Major champions Ash Barty and Sam Stosur are among five Australian hopes in the US Open 2021 women's singles draw. 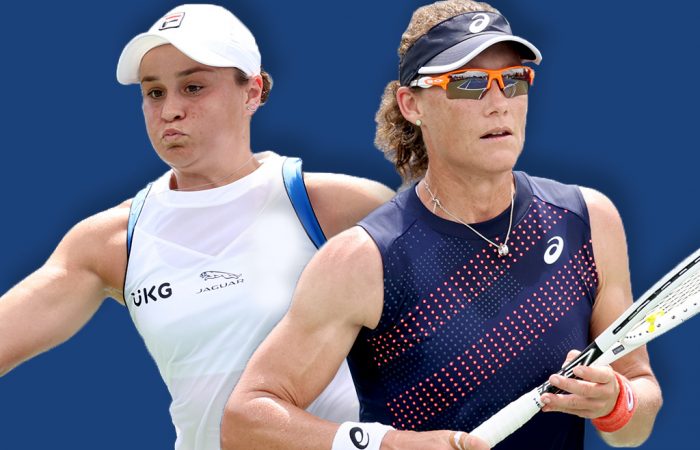 Can an Australian woman make history with a title-winning run at this year’s US Open?

Only two Australians have won a US Open women’s singles title in the Open era. Margaret Court claimed the 1969, 1970 and 1973 titles and more recently, Sam Stosur was crowned the 2011 champion.

On the 10-year anniversary of her maiden Grand Slam singles triumph, Stosur is one of five Australian players competing for the 2021 title.

[1] Ash Barty, 25, Queensland
Barty is the top seed at the US Open for the first time in her career – and the first top-seeded Australian woman at the tournament since Margaret Court in 1970. The world No.1 missed last year’s tournament as she opted not to travel internationally at the height of the COVID-19 pandemic and was the No.2 seed the previous year, where she matched her career-best result with a fourth-round run. Barty has enjoyed a title-winning run in New York before, claiming the doubles crown with American Coco Vandeweghe in 2018. Now she is aiming to join Serena Williams as the only woman in the past two decades to win consecutive Wimbledon and US Open singles titles. The 25-year-old has won 12 of her past 13 matches and begins her sixth US Open campaign against former world No.2 Vera Zvonareva. It is her first meeting with the 36-year-old Russian, who was a US Open finalist in 2010 and is currently ranked No.101.
US Open career record: 9-5
US Open best result: Fourth round 2018, 2019

Ajla Tomljanovic, 28, Queensland
After recently advancing to her first Grand Slam quarterfinal at Wimbledon, Tomljanovic makes her eighth US Open main draw appearance with new self-belief. “I’m trying to just take the best out of it, which is take the confidence I got there and run with it, and use it for my next matches,” she says. The world No.46, however, hurt her hip in Montreal earlier this month and has not played since. Tomljanovic returns to action in New York, determined to advance beyond the second round at the tournament for the first time. She faces a first-time opponent in 19-year-old American wildcard Katie Volynets in the opening round. Tomljanovic has a clear edge in experience against the world No.197, who is making only her third career Grand Slam main draw appearance.
US Open career record: 4-7
US Open best result: Second round 2013, 2017, 2018, 2019

Sam Stosur, 37, Queensland
It has been 10 years since Stosur’s stunning US Open 2011 triumph, where she became the first Australian woman in 31 years to win a major singles title. Currently ranked No.186, Stosur is using a protected ranking of No.97 to make her 16th main draw appearance in New York. Stosur is one of five former champions in the field and making her 68th Grand Slam main draw singles appearance in total. It is the most of any Australian player (man or woman) in history. The former world No.4, who claimed a confidence-boosting 27th career doubles title in Cincinnati last week, faces No.28 seed Anett Kontaveit in the opening round. The 25-year-old Estonian, who won a singles title in Cleveland this week, won their only previous meeting in a three-set battle in 2018.
US Open career record: 22-14
US Open best result: Champion 2011

[WC] Storm Sanders, 27, Western Australia
This is Sanders’ second US Open appearance in singles – and first in the main draw. The world No.133, who last competed in singles in New York in 2013, has been rewarded with a wildcard for her remarkable form this season. The left-handed Sanders began the year ranked No.283, but recently skyrocketed to a new career-high of No.132 with consistent tour-level results. Sanders has scored four top-100 wins, as well as reached two tour-level quarterfinals and qualified at Roland Garros. It is a remarkable story of perseverance, especially considering Sanders only resumed her singles career in late 2019. Prior to that, she had made doubles her priority. In her fifth career appearance in a Grand Slam singles main draw, she plays world No.97 Misaki Doi from Japan.
US Open career record: 0-0
US Open best result: Qualifying first round 2013

[Q] Astra Sharma, 25, Western Australia
The athletic Sharma, who played US college tennis before turning professional and has a base in Nashville, is making her 11th career Grand Slam main draw singles appearance. Sharma has already achieved a series of firsts at this year’s US Open, scoring her first singles win at Flushing Meadows and earning her main draw place through qualifying for a first time. Can she add a first main draw win to that list? The world No.114, who has lost in the opening round in her two previous appearances, faces world No.9 Barbora Krejcikova in the first round this year. If Sharma defeats the 25-year-old Czech and reigning Roland Garros champion, it would be her first career top-10 win.
US Open career record: 0-2
US Open best result: First round 2019, 2020