World No.1 Ash Barty is through to the third round at a WTA 1000 tournament in Cincinnati. 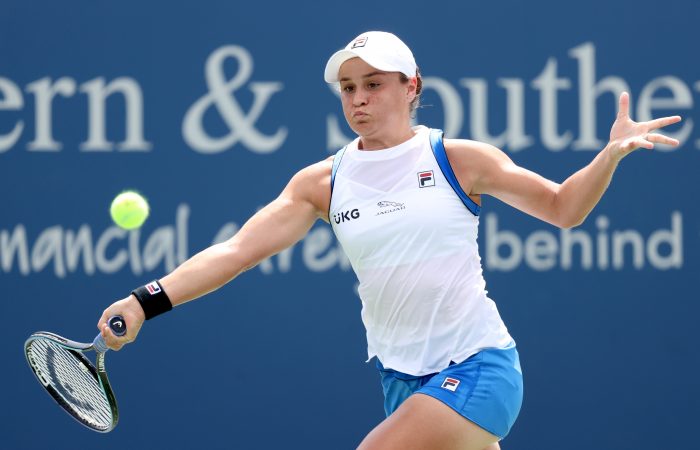 Ash Barty has scored her first singles win since her Wimbledon triumph.

The top-seeded Australian overcome British qualifier Heather Watson 6-4 7-6(3) in a one-hour and 46-minute battle at the Western & Southern Open today.

Nine aces helped Barty control the second-round match. Although she served seven doubles faults, the world No.1 won 84 per cent of points on her first serve.

“Heather’s an extremely tough opponent. It was always going to be an exceptionally tough match for me to find my groove and rhythm and there’s a little bit of work to be done,” Barty said.

“Sometimes you have to find a way to enjoy the fight, enjoy the battle and it was certainly one of those matches today when I had to dig deep. And I felt like when it really mattered, I was able to find some pretty good stuff.”

The victory propels Barty, who had an opening-round bye, into a third-round showdown with former world No.1 and defending champion Victoria Azarenka at the WTA 1000 tournament.

Alex de Minaur’s singles campaign is over, with France’s Gael Monfils scoring a 6-3 7-5 victory in their second-round clash.

De Minaur showed his trademark fight, saving five match points late in the second set against world No.22 Monfils. But in the end, Monfils served out his 500th career tour-level victory after one-hour and 44-minutes on court.

It moves the Australian Open 2019 champions into a second-round showdown with Australia’s Ellen Perez and Czech Kveta Peschke. Stosur and Perez recently played together at the Tokyo 2020 Olympic Games, advancing to the quarterfinals.