Ash Barty: “It would be a dream come true”

While making no secret of how much she would cherish victory, world No.1 Ash Barty takes humble perspective into tonight's Wimbledon final. 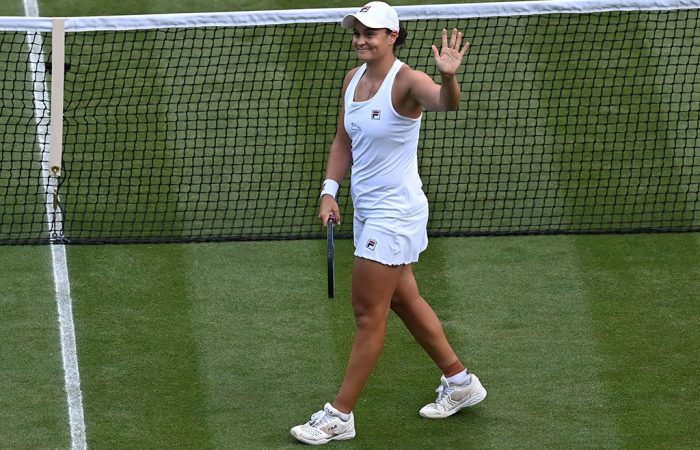 Wearing an outfit inspired by Evonne Goolagong’ Cawley’s history-making breakthrough on the same court 50 years earlier, Ash Barty will tonight walk onto the hallowed turf of the All England Club knowing the prize she’s most craved in tennis is just one step away.

“It would be a dream come true, it really would,” said the world No.1 after securing her path to the 2021 Wimbledon final with a breathtaking semifinal performance against former champion Angelique Kerber.

“I think it took me a long time to verbalise that winning Wimbledon was my biggest dream (and) now that I have that opportunity, it’s incredibly exciting.”

Yet the famously grounded competitor also approaches arguably the biggest occasion of her career with humble perspective. For Barty, soaking up every positive moment of the experience can be equal to winning the match.

“I had a lot of fun. That was a focus of mine,” said the 25-year-old after recovering from a 2-5 second-set deficit against Kerber to triumph in straight sets.

“I wanted to go out there and enjoy playing against Angie in such an incredible moment, and regardless of the result, walk off the court knowing that I enjoyed it, I had fun, and I kind of gave it a crack and gave it my all.

“That’s all that I was going to ask of myself today. To be able to bring a level of tennis like I did was kind of the cherry on top.”

Barty admits that maintaining that buoyant outlook can at times require careful work. “It comes with practise – it’s not easy every day,” she smiled when questioned about her seemingly endless positivity.

“But it’s more about an attitude for me more than anything. It’s about understanding that you don’t get to play tennis forever. You don’t get these opportunities every single day, so it’s about enjoying them and genuinely having that child-like carefree kind of playfulness is really important.”

Barty explains how work with mentor Ben Crowe has helped with that approach. “Being able to add him into our team has brought incredible clarity and, at times, acceptance for what we try and do,” she related. “It’s about each and every day improving as a person as much as it is a tennis player.”

So as the world No.1 prepared for the final with some gentle practice at the All England Club yesterday, there were almost certainly some lighter moments with her team.

“Even though I’m extremely professional and serious and driven and passionate about my career, it’s also important to back off sometimes and just enjoy it and kind of smell the roses along the way, and take it all in,” said Barty, who loves to introduce spontaneous Aussie Rules football games into her practice sessions.

“Because it’s not about the destination. It’s all of the nuances, the silly nuances, the memories that come from the journey are what makes it so special.  And I think being able to appreciate those each and every day is massively important.”

Which is not to say that Barty sidesteps any of the hard work – as the herculean efforts required to reach the Wimbledon decider attest.

Only weeks ago, the bitterly disappointed world No.1 was forced to withdraw from the second round of Roland Garros with a hip injury. Unable to contest any grass-court events in the lead-up, even Barty’s participation at Wimbledon was in doubt.

“I think we had 23 or 24 days in between finishing up in Paris and my first round here. To be honest, it was going to be touch-and-go,” said Barty. “Everything had to be spot on to give myself a chance to play pain-free and to play knowing that I could trust my body.”

As always, Barty gives credit to a team that includes Tennis Australia physiotherapist Melanie Omizzolo and Matt Hayes, her Physical Performance Coach. “They’re the best in the business. They’ve given me this opportunity to come out here and to play,” Barty said.

“I’m pretty excited that I could repay them the favour in a way of giving us an opportunity as a collective, as a whole, to do something pretty special this week.”

For Barty’s long-time coach Craig Tyzzer, there are profoundly mutual awards. “Yeah, amazing,” he said of his experience guiding the Queenslander to new heights at the grass-court Grand Slam. “I mean, obviously it’s always been a dream for Ash to have success at Wimbledon. I think it’s a dream for anyone.

“It’s such an amazing place … as soon as you walk into the club and you’re at Wimbledon, it sort of just is a bit of a spine-tingling thing.”

While adding that the focus remained on the efforts required ahead of the one match remaining, Tyzzer also paused to reflect on what the world No.1 has already achieved. Barty’s three 2021 titles are a season-high on the WTA Tour, but the proud coach believes her Wimbledon progress may well be her best accomplishment.

“I’m constantly surprised,” said Tyzzer. “Nothing’s a given in this sport, and you know tennis is pretty fickle in nature, as the French Open showed. So you take all of it – if you take it for granted, you get sort of lost with it a bit.

“Everything’s a blessing in a lot of ways and to come from where she’s come in the last month or so to get to where she is now, I’m constantly amazed.”

> READ: Aussie stars determined to enjoy the moment at Wimbledon

Endlessly level-headed, Barty points to managing the deadly Pliskova serve and applying scoreboard pressure as keys to the Wimbledon final, which will be an eighth match against the Czech.

But there’s an even bigger priority as the Australian maintains the outlook that’s made her such a fan favourite throughout the world.

“It’s just going to be a moment on Saturday regardless of what happens,” said Barty. “I promised myself that I’ll enjoy it and that’s all that matters.”