On the eve of her first appearance in a Wimbledon ladies' singles final, Ash Barty reflects on her girls' singles triumph at the All England Club a decade ago. 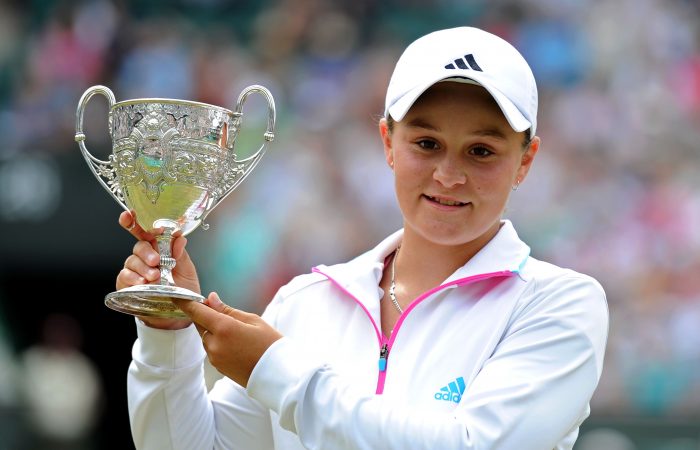 Ash Barty first created history at Wimbledon a decade ago when she won the girls’ singles title as a 15-year-old. Barty’s 2011 triumph thrust her into the spotlight, becoming the first Australian to claim the title in 31 years.

Now, on the 10-year anniversary of that major breakthrough, Barty has the chance to rewrite history again at the All England Club.

The 25-year-old will contest the Wimbledon ladies’ singles final tomorrow, where she is aiming to become the first Australian champion since Evonne Goolagong Cawley 41 years ago.

“I’m certainly in a very different phase of my life now as to where I was 10 years ago,” notes Barty, now the world No.1 and hoping to win a second major singles title.

Her early memories at Wimbledon – which Barty recalls as “incredibly positive and exciting” – provide confidence, as well as a measurement of improvement.

“Every single time I walk into the gates here at the All England Club I remember those matches from junior Wimbledon,” she admits. “I’ve learned so much between now and then. I’ve grown so much as a person and as a tennis player.

“Reliving those memories from my first time here at the All England Club, I think it is just remarkable to think of how raw I was and how inexperienced. Everything was so new, everything was really scary and really big.

“I think now I’m a lot more calm. I feel a lot more comfortable in my own skin and I know that all the work that I do behind the scenes with my team is enough for me to be the best version of myself. I think that’s a really important part of the experience and the learnings that come with playing on tour.”

Barty will aim to put those learnings to use when she plays Czech Karolina Pliskova for the title. It is the first ladies’ singles championship match at Wimbledon featuring two first-time finalists since 1977.

Should Barty win, she will also join elite company as one of only four players in history to claim both the Wimbledon ladies’ singles and girls’ singles titles.

Although much has changed for Barty since her first experience at the All England Club, the world No.1’s love for the tournament is stronger than ever.

“I think each and every time you have the opportunity to play at Wimbledon, it’s a feeling of gratitude and opportunity and excitement,” Barty says.