World No.1 Ash Barty advances to a first Wimbledon final with a straight-sets win over former champion Angelique Kerber. 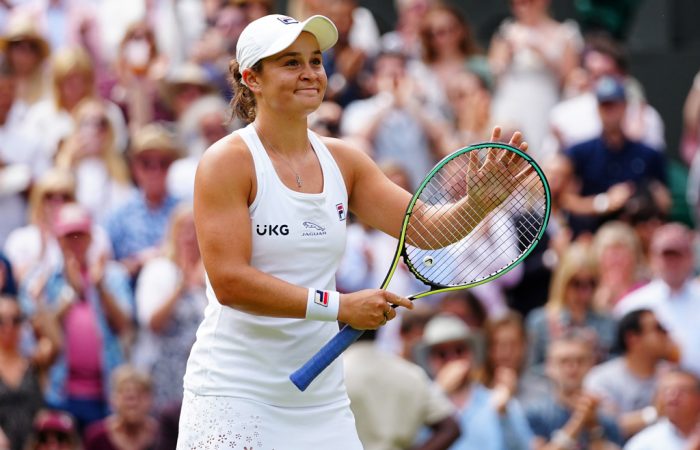 Ash Barty will aim to emulate the history-making feats of long-time friend and mentor Evonne Goolagong Cawley when she takes her place in the Wimbledon singles final on Saturday.

The world No.1 defeated Angelique Kerber 6-3 7-6(3) in an 87-minute semifinal to earn the chance to compete for the coveted title.

Barty is the first Australian woman to advance to a singles final at the All England Club since 1980, when Goolagong Cawley lifted the Venus Rosewater Dish for the second time.

The 2021 Championships also marks 50 years since Goolagong Cawley won her first Wimbledon title, with Barty wearing a specially-designed outfit to mark the golden anniversary of that victory.

It adds special meaning to progress to the final, with added synergy in the 10 years that have passed since Barty claimed the Wimbledon girls’ title as a 15-year-old.

“This is incredible. I think this is close to as good a tennis match as I’ll ever play,” a delighted Barty related.

“I’m incredibly proud of myself, my team, and now we get a chance on Saturday to try to live out a childhood dream.”

The Queenslander required all her renowned weaponry to overcome Kerber, the Wimbledon 2018 ladies’ singles champion having established some stunning form this grass-court season.

After lifting her 13th singles trophy at Bad Homburg on the eve of Wimbledon, the German built a 10-match winning streak with her progress to the semifinals.

That Barty’s best tennis would be required for victory was clear from the opening game, which began with a rare double fault from the No.1 seed. But saving break point also provided confidence for Barty, who immediately secured a first break of serve with a beautiful forehand winner in the following game.

She consolidated for a 3-0 lead to complete a perfect start and maintaining authority with her all-court tennis, closed out the 34-minute set with one of eight aces.

While the world No.1 had thrilled an absorbed Centre Court crowd with her superb groundstrokes and carefully constructed strategy until then, Kerber was determined to disrupt Barty’s momentum.

She did so by at last breaking the Barty serve on her sixth break point opportunity in the first game of the second set. The Australian  would earn break points back, but a steely Kerber built a 5-2 advantage.

Barty’s calm under pressure was never better than when she fought her way back in the ninth game. Unnerving the former champion with an overhead smash winner on the opening point, she secured the break with a superb forehand winner. She calmly consolidated to level for 5-5 before the set progressed to a tiebreak.

There, the top seed simply competed brilliantly, quickly building a 6-0 lead and holding her nerve as Kerber saved a trio of match points. Barty secured victory by forcing a Kerber error on her fourth match point opportunity.

“That match was a great level, the best level I’ve played, in quite some time. I think Angie is an incredible competitor. She brought out the best in me today,” Barty reflected.

“I think being able to challenge myself against a champion like her, it was just nice to play a really good level throughout the whole match, kind of fought and scrapped when I had to, controlled the ball when I had to. But being able to have that feeling on the last point was amazing.”

With 38 winners recorded against 16 unforced errors in the semifinal, Barty will take impressive momentum into Saturday’s final, where she’ll face Karolina Pliskova.

Ashleigh Barty is bidding to become the 1st No.1 seed to win #Wimbledon since Serena Williams in 2016.

Barty is competing with the chance to become one of only four women – joining Ann Jones, Martina Hingis and Amelie Mauresmo – with both a junior and a senior title.

The world No.1, who claimed her first Grand Slam title at Roland Garros in 2019, cherishes the opportunity to add another chapter to her thrilling tennis story.

“I’ve had an incredible journey. I’ve had ups and downs and everything in between and I wouldn’t change one day or one moment or one kind of road that we’ve taken in my path and my journey. It’s been unique, it’s been incredible, it’s been tough,” she smiled.

“There’s been so many things that have led to this point. I certainly wouldn’t change one thing about it. I’m enjoying every single day that we get to come out here and do what I love.

“Being able to play on a final Saturday here at Wimbledon is going to be just the best experience ever.”