Aussie stars determined to enjoy the moment at Wimbledon

World No.1s Ash Barty and Dylan Alcott are aiming to add to their Grand Slam collection on day 12 at Wimbledon, while John Peers is looking to extend a career-best run. 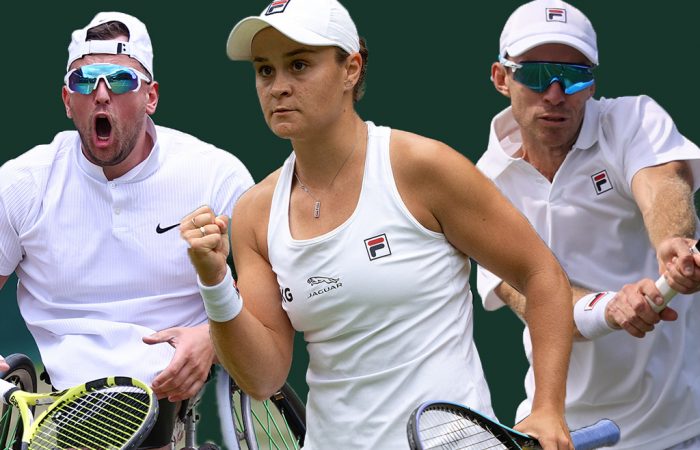 Ash Barty is the first Australian in more than four decades to advance to a ladies’ singles final at Wimbledon.

Not since Evonne Goolagong Cawley won the 1980 title has an Aussie woman played for the coveted Venus Rosewater Dish.

“Being able to have an opportunity to play in a final here at Wimbledon is incredible,” says the 25-year-old from Queensland.

The world No.1 enters a final showdown against Czech Karolina Pliskova with a deep appreciation for the potential to make a childhood dream come true.

Barty is not the only Australian hoping to experience Grand Slam glory on day 12 at the All England Club.

Already a winner of two Grand Slam singles titles this season, Dylan Alcott is looking to complete the third leg in a potential Golden Slam (winning all four Grand Slams plus a Paralympic Games gold medal in the same year).

Yet the world No.1 quad wheelchair player is staying focused on his Wimbledon final clash with world No.3 Sam Schoeder.

“It can be a dangerous game when you’re thinking too far ahead, so I try not to,” said Alcott after a comprehensive semifinal win against American David Wagner.

[1] Ash Barty (AUS) v [8] Karolina Pliskova (CZE)
Ladies’ singles, final, Centre Court, first match (from 11pm AEST)
Not since 1977 have two first-time finalists competed for the Wimbledon ladies’ singles title. The situation might be new, but Barty knows what to expect against 29-year-old Pliskova. She has played the former world No.1 seven times throughout her career – including twice on grass, splitting results. “She has the ability to take the match away from you,” Barty says of the world No.13, who she last played on grass in 2016. “She’s got a big one-two punch off her serve and if she can control the service games, it puts you under the pump on your own service game. So I think being able to keep scoreboard pressure is a massive thing.” Pliskova, who had never progressed beyond the fourth round in eight previous Wimbledon appearances, is contesting her second major final and first since a runner-up finish at the 2016 US Open. This is also Barty’s second major final. She won her first at Roland Garros in 2019.
Head-to-head record: Barty leads 5-2
Last meeting: Barty won 2-6 6-1 7-5 (Stuttgart, April 2021)

[17] John Peers (AUS)/Zhang Shuai (CHN) v [7] Neal Skupski (GBR)/Desirae Krawczyk (USA)
Mixed doubles, semifinals, No.1 Court, second match (not before 11pm AEST)
Peers has progressed to a Grand Slam mixed doubles semifinal for the second time in his career – and for the first time at Wimbledon. The 32-year-old Australian is now aiming to reach a first major final in mixed doubles. The world No.24 and his Chinese partner Zhang have not lost a set this tournament – but neither have the seventh-seeded combination of world No.18 Skupski and world No.17 Krawczyk.