Australians Ajla Tomljanovic and Ash Barty are enjoying impressive runs at Wimbledon, advancing to the fourth round. 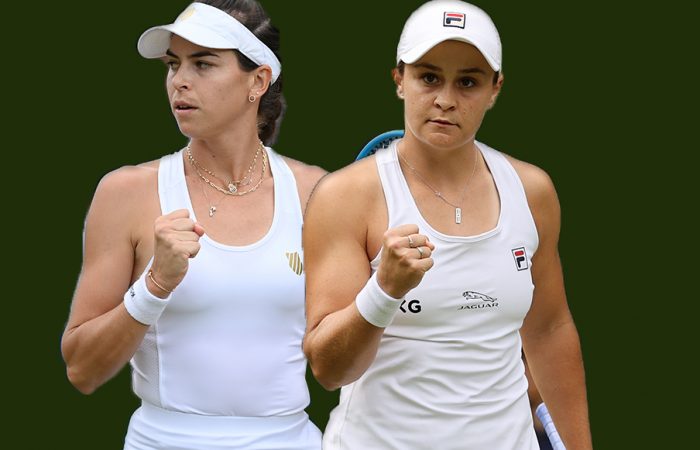 For the first time in more than 30 years, two Australian women have advanced to the fourth round at Wimbledon.

This last happened in 1989, when Jo-Anne Faull and Hana Mandlikova made the round of 16.

Ajla Tomljanovic and Ash Barty have a chance to create further history too. Should they both win their fourth-round matches on day seven, they will face-off in the quarterfinals.

The last all-Australian quarterfinal clash in a ladies’ singles draw at Wimbledon was in 1980, when Evonne Goolagong-Cawley defeated Wendy Turnbull during her title-winning run.

Can Tomljanovic and Barty continue their winning runs? We’ll find out on day seven, where they are among nine Australians competing at the All England Club.

[1] Ash Barty (AUS) v [14] Barbora Krejcikova (CZE)
Ladies’ singles, fourth round, No.1 Court, first match (from 10pm)
After matching her career-best result at Wimbledon, Barty is now looking to advance to her first quarterfinal. But first, the 25-year-old from Queensland needs to overcome world No.17 and recently-crowned Roland Garros champion Krejickova. The 25-year-old Czech is on a 15-match winning streak, which stretches back to May. “It’s a new challenge against Barbora, who’s obviously played some exceptional tennis over the last couple months, ” Barty says. “Another challenge I look forward to. Nice to be able to put myself in this position again to try to go that one step further.” This is Barty’s fourth match in a row this tournament against a first-time opponent – she is familiar with Krejickova’s game however, having played multiple times in doubles.
Head-to-head record: First career meeting

Ajla Tomljanovic (AUS) v [WC] Emma Raducanu (GBR)
Ladies’ singles, fourth round, No.1 Court, third match
This is Tomljanovic’s best Grand Slam result in seven years – and the 28-year-old could not be prouder. “For me it’s a huge moment in my career, especially with everything that I have been through. I’m extremely happy to be in the fourth round,” says the world No.75. To reach a first major quarterfinal, Tomljanovic needs to end the winning run of British hope Raducanu. The 18-year-old wildcard, ranked No.338, has become the youngest British woman to reach the Wimbledon fourth round in the Open era. “She seems like a really solid baseliner, big game,” Tomljanovic notes. “How great is it to make fourth round when you’re 18 in your home Slam? It’s unbelievable. She will definitely have the crowd … but it’s going to be so fun for me just go out there and play.”
Head-to-head record: First career meeting

Storm Sanders (AUS)/Caroline Dolehide (USA) v [13] Nadiia Kichenok (UKR)/Raluca Olaru (ROU)
Ladies’ doubles, third round, Court 8, second match
This is the first time 26-year-old Sanders has made a third round at a Grand Slam tournament. The world No.59 and her 22-year-old American partner have not lost a set so far, continuing their good form after reaching a WTA final in their first tournament together last month. This is a major opportunity for both teams. Olaru, a 32-year-old from Romania, is aiming to make her second career Grand Slam quarterfinal and 28-year-old Kichenok is trying to reach her first.

[16] Max Purcell (AUS)/Luke Saville (AUS) v [3] Juan Sebastian Cabal (COL)/Robert Farah (COL)
Gentlemen’s doubles, third round, No.3 Court, third match
Enjoying a career-best run at Wimbledon, 23-year-old Purcell and 27-year-old Saville face the defending champions in the third round. This is a rematch of a third-round match at Roland Garros last month, where 35-year-old Cabal and 34-year-old Farah scored a straight-sets win. Purcell and Saville, the Australian Open 2020 finalists, are more comfortable on grass and have nothing to lose against the top-five ranked Colombians.

Andrei Vasilevski (BLR)/Arina Rodionova (AUS) v ALTERNATES
Mixed doubles, second round, Court 14, third match
The 31-year-old Rodionova is enjoying a career-best Wimbledon mixed doubles run, advancing to the second round for the first time. The world No.82, who lists grass as her favourite surface, and her Belarusian partner, a 31-year-old ranked No.81, were meant to play No.16 seeds Marcus Daniell of New Zealand and Sharon Fichman of Canada. They, however, have withdrawn and will be replaced with an alternate team.

[17] John Peers (AUS)/Zhang Shuai (CHN) v Roman Jebavy (CZE)/Marketa Vondrousova (CZE)
Mixed doubles, second round, Court 17, third match
World No.24 Peers is making his eighth appearance in a Wimbledon mixed doubles draw. The 32-year-old’s best result is a quarterfinal run in 2013. He is partnering Zhang, a 32-year-old from China with a doubles ranking of No.48. They have previously contested seven Grand Slams together and were US Open semifinalists in 2018. Teaming up at Wimbledon for a third time, they are aiming to better 2019’s third-round run.

[WC] Nick Kyrgios (AUS)/Venus Williams (USA) v [4] Edouard Roger-Vasselin (FRA)/Nicole Melichar (USA)
Mixed doubles, second round, No.3 Court, fourth match
The wildcard pairing of Kyrgios and Williams gelled well in their first-round win – and the crowd loved it. “It was just a lot of fun,” Kyrgios said of partnering the 41-year-old former world No.1. They are scheduled to play the No.4 seeds next. However, with an abdominal injury forcing Kyrgios to retire during his third-round singles match two days ago, there is a question mark on his fitness.

Philip Sekulic (AUS) v [8] Sean Cuenin (FRA)
Boys’ singles, first round, Court 6, fifth match
Draws have not been kind to 17-year-old Sekulic in his junior Grand Slam career. He faced the No.1 seed in his Roland Garros debut last month and now plays the No.8 seed in his first Wimbledon appearance. The world No.72 carries momentum into this match, having made the third round as a qualifier at an ITF Junior tournament in Roehamption last week. However, so does 17-year-old Cuenin. The world No.12 recently made the boys’ singles semifinals at Roland Garros.