Australia's Marc Polmans has made a memorable Wimbledon debut, scoring a four-set victory against former quarterfinalist Yen-Hsun Lu to move into the second round. 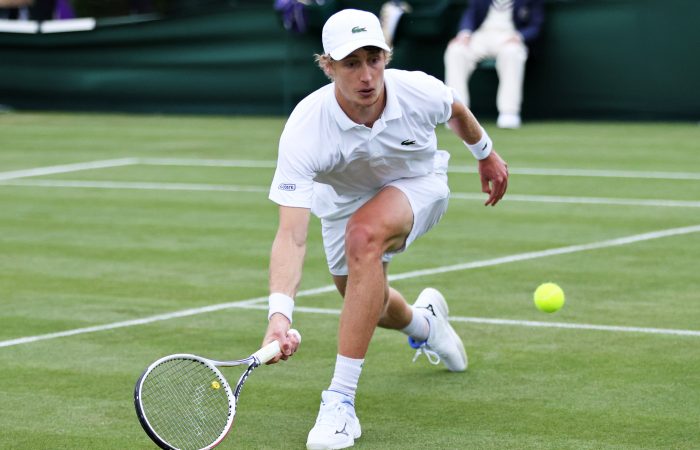 Australian Marc Polmans is through to the second round at Wimbledon.

The 24-year-old, who earned his place in a Grand Slam main draw as a qualifier for the first time in his career, has continued his winning run with a 6-2 7-5 4-6 6-1 victory over Wimbledon 2010 quarterfinalist Yen-Hsun Lu.

Polmans took two hours and 26 minutes to defeat the more experienced Lu, a 37-year-old from Chinese Taipei making his 15th main draw appearance at the All England Club.

“I’m super-pumped to get through and with my first-ever win in main draw at Wimbledon,” Polmans said.

“It was extremely tough conditions, late at night and it was starting to get all dark and slippery. When he fought back to take the third set, I thought we’d be in for another long one so I’m grateful I was able to close it out in the fourth.”

This effort matches Polmans’ career-best major result, having previously made the second round at Australian Open 2020 (as a wildcard) and Roland Garros 2020 (as a lucky loser).

Looking to advance to his first major third-round, the No.154-ranked Polmans plays either No.17 seed Cristian Garin of Chile or Spanish qualifier Bernabe Zapata Miralles next.

Earlier today, world No.1 Ash Barty made a winning start to her Wimbledon campaign with a three-set victory against former world No.6 and cancer survivor Carla Suarez Navarro.

The No.15 seed entered the tournament in red-hot form, having won his fifth career ATP singles title in Eastbourne last week. However, he was unable to continue that momentum and lost in four sets.

Chris O’Connell’s first-round match against No.13 seed Gael Monfils has extended to a third day. The match resumed with a third set tiebreak today, but play was suspended again in the fifth set due to slippery conditions.

Nick Kyrgios will need to return tomorrow as well to complete his first-round match against No.21 seed Ugo Humbert, which is also into a fifth set when play was suspended.

With rain interrupting play again, first-round matches for James Duckworth, Ajla Tomljanovic and Ellen Perez were all rescheduled for tomorrow.