Ellen Perez, Ajla Tomljanovic, Ash Barty and Sam Stosur are our Australian hopes in the ladies' singles competition at Wimbledon 2021. 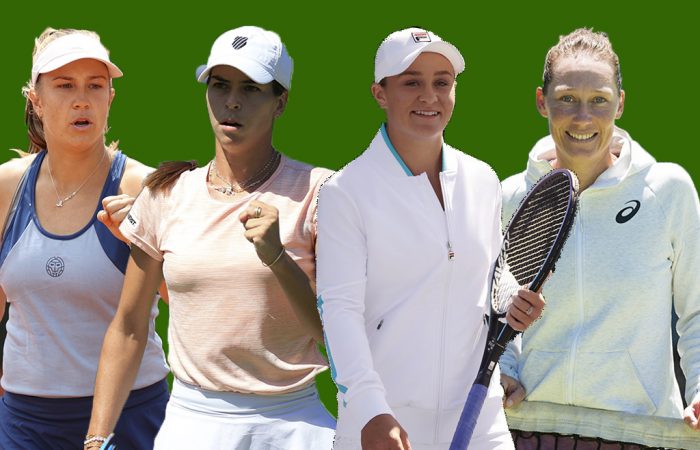 It has been 41 years since an Australian won the ladies’ singles title at Wimbledon. Can world No.1 Ash Barty follow in the footsteps of her mentor Evonne Goolagong Cawley and triumph at the All England Club in 2021?

Ash Barty, 25, Queensland
It has been 10 years since Barty burst into the spotlight after winning the Wimbledon girls’ singles title as a 15-year-old. The world No.1 has since made four main draw appearances at the All England Club, with her best effort a fourth-round run as the top seed in 2019. Barty, who has made no secret that winning a Wimbledon ladies’ singles title is her biggest goal, begins her 2021 campaign against Spain’s Carla Suarez Navarro. The former world No.6 is retiring at season-end and recently returned to the tour after overcoming cancer.
Wimbledon career win-loss record: 5-4
Wimbledon best result: Fourth round (2019)

Ajla Tomljanovic, 28, Queensland
Tomljanovic has typically struggled at Wimbledon, winning only two matches from her five previous main draw appearances. But the world No.73’s self-belief on grass is growing, as she demonstrated with a top-20 win against Elise Mertens at Birmingham two weeks ago. “I’m striking the ball the best I ever have going into Wimbledon. So that all gives me confidence,” she says. Tomljanovic faces Belgian qualifier Greet Minnen in the opening round, a 23-year-old ranked No.117 and making her Wimbledon debut.
Wimbledon career win-loss record: 2-5
Wimbledon best result: Second round (2015, 2019)

Sam Stosur, 37, Queensland
Stosur is making her 67th Grand Slam main draw singles appearance, tying her with Martina Navratilova as the sixth most of any woman in history. It is a 17th Wimbledon appearance for the 37-year-old, who is returning from a foot injury. Although Stosur has never made the second week in singles at the All England Club, she is a three-time ladies’ doubles finalist and two-time mixed doubles champion. The former world No.4 plays American Shelby Rogers, who is ranked No.47, in the first round.
Wimbledon career win-loss record: 12-16
Wimbledon best result: Third round (2009, 2013, 2015)

Ellen Perez, 25, New South Wales
Already a top 50-ranked doubles player, the left-handed Perez is proving she is a singles threat too. She makes her Wimbledon debut as a qualifier. The world No.231 earned her place in the main draw after winning three straight-sets qualifying matches, where she impressively struck 87 winners to defeat three higher-ranked opponents. In her third Grand Slam main draw singles appearance, Perez faces French qualifier Clara Burel – a former world No.1 junior who is currently ranked No.142.
Wimbledon career win-loss record: 0-0
Wimbledon best result: Making debut