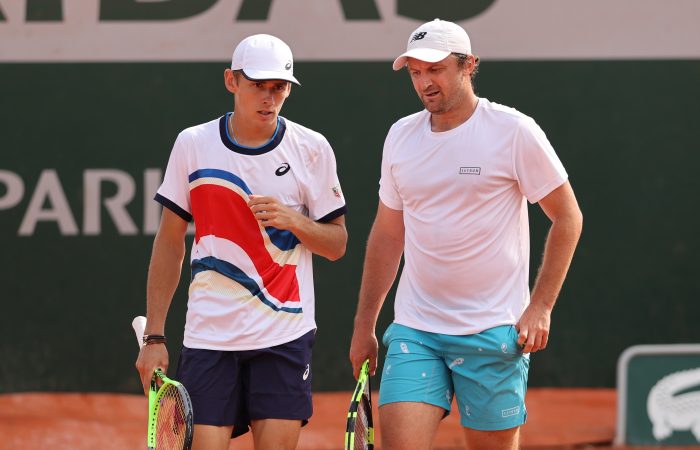 Alex de Minaur’s singles campaign is over at Roland Garros – but the 22-year-old Australian is still chasing Grand Slam glory in Paris.

After his second-round singles loss, De Minaur’s attention turns to teaming with close friend and fellow Aussie Matt Reid in the doubles competition. Competing in their fifth major tournament together, they have matched their best effort in reaching the second round. Now their sights are on progressing even further …

Aussies in action on day six:

Alex de Minaur (AUS)/Matt Reid (AUS) v Marcelo Arevelo (ARG)/Matwe Middelkoop (NED)
Men’s doubles, second round, Court 6, third match
Both De Minaur, ranked No.64, and world No.100 Reid are aiming to reach a Grand Slam third round for the first time in doubles. They showed plenty of fight in their first-round win, saving five match points to advance. The Aussies have another tough assignment against world No.45 Arevelo and world No.36 Middelkoop in the second round. Their unseeded opponents, who upset the No.12 seeds in the opening round, made the Australian Open quarterfinals earlier this year and were semifinalists in Rome last month.

[10] John Peers (AUS)/Michael Venus (NZL) v Robin Haase (NED)/Jan-Lennard Struff (GER)
Men’s doubles, second round, Court 9, third match
Peers, who is through to the second round in Paris for the eighth time in his career, and Venus face a tough test against unseeded duo Haase and Struff – two proven doubles players who eliminated Aussies Ebden and Smith in the opening round. The 32-year-old Peers, the world No.25, and 33-year-old Venus, who is ranked No.15, have won eight of their past nine matches together. This provides valuable momentum as they aim to better last year’s second-round exit at Roland Garros.