Australian Alexei Popyrin's Miami Open campaign is over, beaten in a hard-fought third-round clash with world No.2 Daniil Medvedev. 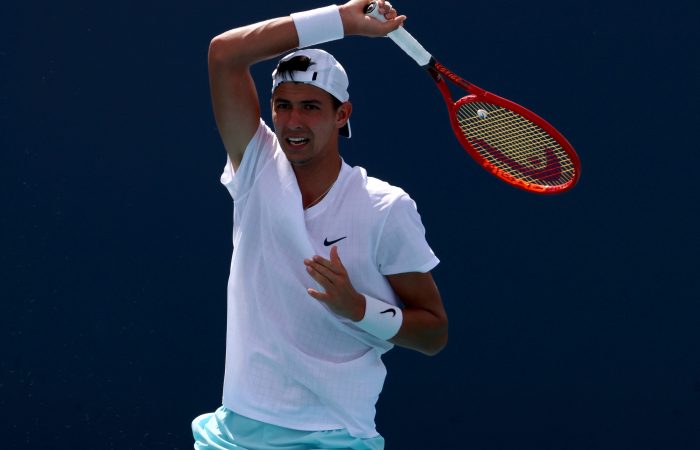 Russian Daniil Medvedev has ended the winning run of Australia’s Alexei Popyrin at the Miami Open.

The top-seeded Medvedev recorded a hard-fought 7-6(3) 6-7(7) 6-4 victory against Popyrin in their third-round showdown today.

World No.2 Medvedev, who was cramping in the final stages of the two-hour and 37-minute battle, was physically and mentally tested by his 21-year-old opponent.

Popyrin fought back from a 2-5 deficit in the second set, saving three match points at 4-5 0-40 on his own serve.

Forcing the second set into a tiebreak, the 21-year-old Australian’s spirited comeback was rewarded on his third set point.

Games went on serve early in the deciding set, before Medvedev showed his class and experience to break Popyrin’s serve in the seventh game. From there, the Australian Open 2021 finalist held on to record victory.

James Duckworth also lost in third-round action today. The 29-year-old Australian was unable to take advantage of early leads in both sets against No.32 seed Alexander Bublik.

In doubles action, Luke Saville and Austrian partner Oliver Marach have advanced to the quarterfinals. Russian combination Andrey Rublev and Karen Khachanov were unable to play their scheduled second-round match.

It is the second time in the 27-year-old Saville’s career that he has reached this stage at an ATP Masters 1000 event. They now play Australian Open champions Ivan Dodig and Filip Polasek for a place in the semifinals.