Alexei Popryin explains how hard work combined with self-belief to deliver a first ATP title – and why he considers it a stepping-stone to bigger successes. 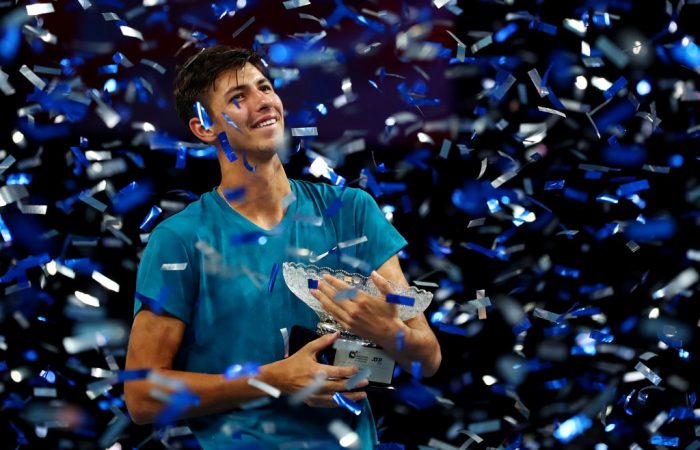 Within minutes of lifting a maiden ATP-level trophy at the Singapore Tennis Open, Alexei Popyrin was already thinking about returning to his home base in Europe.

“My whole family is in Europe, except for my older sister,” Popyrin explained to reporters in Singapore. “I’m going to see my family, my girlfriend and my dog. Everybody. I miss everybody.”

First, however, there was time for the 21-year-old Popyrin to reflect on what’s already been a monumental season.

“I don’t think it’s a feeling I will ever feel again, to be honest. It was an unbelievable feeling, to win my first ATP title. Maybe I’ll get the feeling if I win my first Grand Slam – hopefully that will happen – but this feeling is unbelievable,” he commented.

“It’s a little bit of relief but overjoy, and a whole lot of emotions mixed together making one unbelievable feeling.”

Alongside match points saved against No.13 seed David Goffin in the first round of the Australian Open and his title breakthrough in Singapore, Popyrin had also achieved a peak world No.82 ranking.

It’s perhaps natural that the young Australian was so keen to celebrate those milestones with his family and closest supporters, Popyrin quick to acknowledge the shared nature of his breakthrough title.

“A lot of sacrifice, a lot of dedication, a lot of hard work went into this from myself and my team and my whole entire family,” said Popyrin, who trains at the Mouratoglou Tennis Academy in southern France.

“I’ve done it for everyone who was involved and I’m just so proud I could actually get it done.”

But Popryin – who is among only nine players aged 21 or under in the ATP’s top-100 – could also take individual credit for a remarkable turnaround.

After the resumption of professional tennis last August, Popyrin failed to win a main draw match in any ATP-level tournaments. A semifinal appearance at the Parma Challenger in Italy was his lone standout performance.

Popyrin explained how the tour suspension in March and the three-month lockdown in France had halted all momentum.

“I didn’t do it too professionally. There were no courts to go on. We did buy a treadmill and I was on that quite a lot, but I ended gaining a few kilos and really not being the fittest I could be,” he admitted.

“Basically, the back end of last year was trying to get to a level that I know I can play at. It was very difficult the last year for me and I think the results showed that – they weren’t great results.

“Going into pre-season I mixed up my, I changed my team a little bit and I took initiative of everything that I’m doing. I told myself, I told everybody, that ‘look, four weeks in December, the two weeks before Aussie Open, it’s all going to be hard work’.

“I put my mentality to that, and you know, we worked. We worked really, really hard throughout the month and a half of pre-season and it’s paying off.”

The strong work ethic is enhanced by natural ability and well-deserved confidence, Popyrin having first made his mark by claiming the 2017 Roland Garros boys’ title. He became one of just five Australian males, and the first since Phil Dent in 1968, to do so.

Indeed, there was a notable grittiness to the new champion, whose victims in Singapore included countryman Matt Ebden and former world No.3 Marin Cilic. Impressing with some clutch performances in Singapore, Popyrin won all five tiebreaks he contested until the final.

A come-from-behind win over the higher-ranked Alexander Bublik in the Championship match further underlined composure, Popyrin unfazed after his “one sloppy game” helped the talented Kazakhstani claim the first set advantage.

“I knew I was serving really well, and I knew I could get through my service games fairly easy if I kept serving the way I did,” said Popryin, who recorded 60 aces over five matches in Singapore and won the last four games of the final to secure his 4-6 6-0 6-2 victory over Bublik.

First ATP final, first ATP title for @AlexeiPopyrin99 as he beats Bublik in a wild match in Singapore! pic.twitter.com/pPd2BB84kd

Establishing an 8-2 match-winning record in the past two months, there’s much for Popyrin to build on throughout the remaining 2021 season.

“There’s still a lot of hard work to be done. I know that for sure and my team knows that. And we’re going to do that hard work but it’s a good start,” he reasoned. “Hopefully, yeah, I can build on this result and hopefully I can have a year the way it started. That would be good.”

Not that the level-headed competitor is publicly pointing to any lofty targets. Asked about his new career-high world No.82 ranking, the 21-year-old turned the conversation to more incremental developments.