Relishing the opportunity to play singles at this week’s Adelaide International, Australian Storm Sanders is enjoying a career-best run. 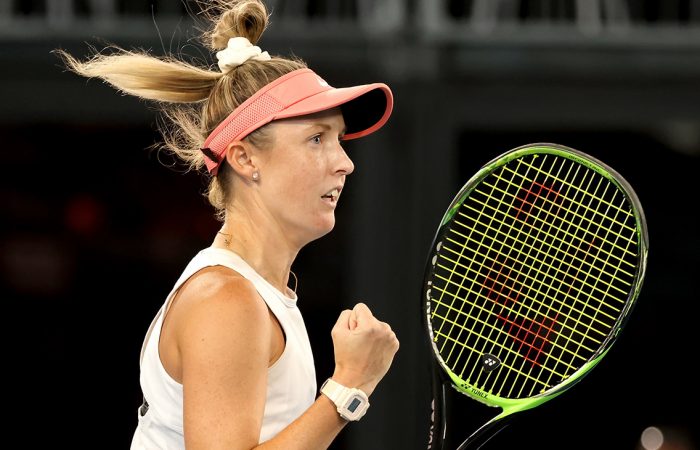 World No.292 Storm Sanders has surprised many with her exceptional run at this week’s Adelaide International.

The 26-year-old has defeated four higher-ranked opponents to advance to her first WTA-level singles quarterfinal.

A first-round qualifying victory against world No.65 Bernarda Pera was Sanders’ first top-100 victory in seven years. She followed this with another impressive win against world No.118 Caty McNally to qualify for a WTA tournament for a third time in her career.

Sanders then overpowered world No.74 Ajla Tomljanovic in the opening round, conceding only three games to her compatriot.

Yesterday, she continued her sensational form to defeat world No.28 Yulia Putintseva and record her first top-30 victory.

Not everyone is surprised though. This includes Sanders herself, who knew she had the potential to challenge the world’s best.

“To be honest, I’m actually not surprised because I’ve been playing really, really well,” said Sanders, who received a wildcard into the qualifying draw.

“I think everyone who’s been training with me – I train with Dasha (Daria Gavrilova) and Sam Stosur – and I think all the coaches are not surprised, I think it’s been a long time coming.”

Sanders achieved a career-high singles ranking of No.202 as a teenager, however soon began to enjoy more success in doubles. The powerful left-hander broke into the world’s top 100 in doubles in 2017 and opted to make the tandem discipline her primary focus.

After being sidelined with injury for most of 2018, Sanders returned to the tour with a renewed passion. Tempted to play singles again, she was six months into a successful comeback when the COVID-19 pandemic hit.

Sanders was ranked No.276 in singles when the tour was suspended last year. Her doubles ranking at the time was No.75, so when the tour resumed doubles became her main priority again.

“I haven’t actually had that many opportunities to play singles. With coronavirus and my ranking, I wasn’t able to get into many events. So I kind of would play whenever I could, but I didn’t have a singles schedule,” Sanders explained.

The Adelaide International is only the fourth tour-level singles tournament Sanders has contested in the past 12 months.

She did participate at the UTR Pro Tennis Series in Australia last year, winning nine of her 12 matches and claiming one singles title in Melbourne. But before this week, the 26-year-old had played only one tour-level singles match in the last five months.

“I played Australian Open qualifying in Dubai and I played (top seed) Kaja Juvan, who is a very good player,” Sanders said.

“Then to have this opportunity I’m like, ‘I got to make the most of it’. I don’t know how many singles events I’m going to be able to play with where my ranking is.”

However, Sanders’ ranking is projected to improve almost 100 places following her performances this week. She is now verging on breaking into the world’s top 200 and setting a new career-high.

“(That) is awesome, I probably wasn’t expecting that just because it was a big event this week,” Sanders said of her remarkable rise.

“Hopefully that gets me in qualifying to French Open and also the WTA events so I will get the opportunity to play more singles this year.”

“I didn’t really get to play that much in 2020 and I just kind of could play where I could. Now to be able to actually back up some wins has been awesome and it gives me the confidence and belief in my game,” Sanders said.

Sanders faces an even bigger test against world No.12 Belinda Bencic in tonight’s quarterfinals, where she is aiming to score a first top-20 victory.

“Hopefully I can keep going,” Sanders said. “It’s going to be a really tough match, but I’m going to go out there, stick to my game plan and just go for it.

“I have absolutely nothing to lose. I’m in the quarters here. I’m just going to go out, have fun and just fight for every point.”