As Australian wildcards Marc Polmans and Storm Sanders enjoy a career-best run at Australian Open 2021, they are also demonstrating the advantages of playing doubles with a friend. 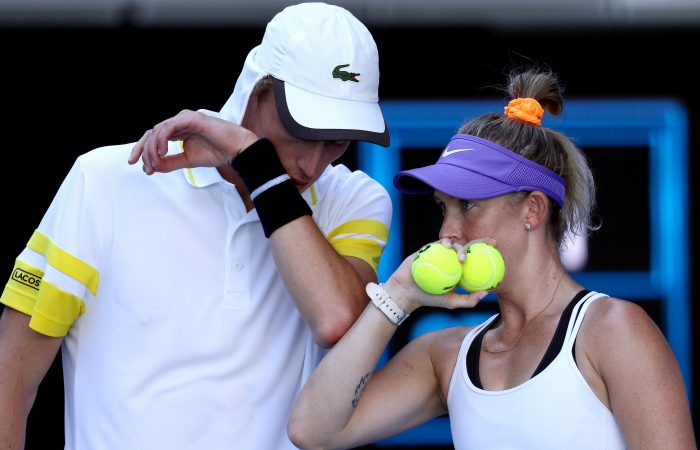 There are many factors to consider when selecting a doubles partner – but for Australian duo Marc Polmans and Storm Sanders, teaming up with a friend on the mixed doubles court makes it the most enjoyable.

“We train at the same venue (Melbourne’s National Tennis Centre), so I see her all almost every day at training. It’s a lot of fun to get out there and play with someone I know quite well.”

The duo are proving a formidable mixed doubles combination at the Australian Open this fortnight too, winning three matches to advance to the semifinals.

It is the third time they’ve played together at the Australian Open, with their previous best result a quarterfinal run in 2018.

“We’re good friends. It’s nice to be able to play with a friend out there, especially when moments get a bit tough,” Sanders says.

Pushed to a match tiebreak in their three matches so far this tournament, they’ve proved cool under pressure each time.

“Stormy and I know each other’s games quite well, which helps to get through those pressure situations,” Polmans says.

This is the 26-year-old Sanders’ first career Grand Slam semifinal. It’s also welcome reward for perseverance for the world No.66, who spent most of 2018 sidelined with injury.

“It’s obviously very exciting to do it at home as well,” Sanders beams, talking of her Grand Slam breakthrough.

Mid-press conference, Sanders turns to her 23-year-old partner to clarify if it is also his first major semifinal.

“It’s my second – but I didn’t want to say anything,” Polmans politely says with a big smile.

The 23-year-old Melburnian, who is ranked No.133, also advanced to this stage in the Australian Open men’s doubles draw in 2017.

The respect between the pair is evident as they reflect on a memorable Australian Open 2021 run, which continues today with a semifinal showdown against sixth seeds Rajeev Ram and Barbora Krejcikova.

“We’re just trying to enjoy it out there,” Sanders says.

“We know each other well and feel quite comfortable together on the court, so it’s been good to get some wins this year.”

Their next opponents are both top-20 players and have experience playing together too. The American-Czech team won the Australian Open 2019 mixed doubles title and enter today’s match on an eight-match winning streak as a team at Melbourne Park.

“We’re still in the AO, so that’s a positive thing,” Polmans says of their chances. “We’ll just try do our best.”

With fans permitted to return to Melbourne Park today, the Aussie duo are also excited to play in front of a crowd again.

Win or lose, one thing is certain – Polmans and Sanders will continue to enjoy their time on court together.