Australian Storm Sanders advances to the Adelaide International second round with a straight-sets win against compatriot Ajla Tomljanovic. 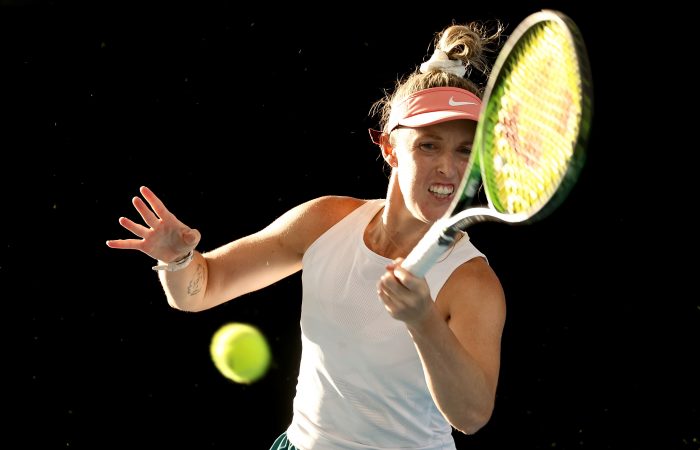 Confidence can be a winning ingredient on court, as Storm Sanders is demonstrating this week at the Adelaide International.

The world No.292 qualifier overpowered fellow Australian Ajla Tomljanovic in the opening round at Memorial Drive Tennis Centre tonight, recording a comprehensive 6-1 6-2 victory.

🇦🇺 @stormsanders94 blitzes past compatriot Ajla Tomljanovic 6-1 6-2 in 63 minutes to advance to the second round. pic.twitter.com/46464kzyau

Sanders hit eight winners to three in a 25-minute opening set and did not face a break point on serve.

“I served really well tonight, I was hitting my spots and mixing it up. I was just trying to be aggressive and play my game. It was a big match for me tonight, my first WTA 500 main draw,” Sanders said.

She continued that untouchable momentum in the second set, racing ahead 4-1 with a double break. Tomljanovic had no solutions, with Sanders sealing the third WTA main draw win of her career (and first at WTA 500 level) in 63 minutes.

“I’ve never played against Ajla before. She’s obviously a very good player and strikes the ball really, really well,” Sanders said. “To be honest, I was under no pressure … I was just out here, having a good time.”

It continues a sensational run this week for Sanders, who finished tonight’s match with 17 winners to Tomljanovic’s five.

As a wildcard in the qualifying draw, Sanders recorded her biggest win in seven years to defeat world No.65 Bernarda Pera in the opening round. She then sealed her place in the main draw with a straight-sets win against world No.113 Caty McNally. It marked the first time the Melbourne-based Sanders had recorded consecutive wins against top 120-ranked opponents in her career.

That streak has now extended to three following tonight’s win against world No.74 Tomljanovic.

Can Sanders make it four? We’ll find out when she plays world No.28 Yulia Putintseva of Kazakhstan in tomorrow’s second round.

It’s been a great day for Australian qualifiers in Adelaide, with Maddison Inglis winning a three-set battle against Sam Stosur.