Stosur and Ebden ready to challenge for Australian Open title 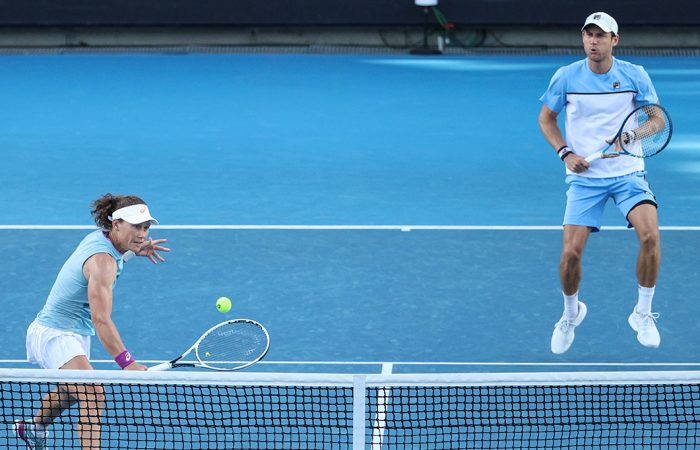 Sam Stosur and Matt Ebden have a chance to add to their Grand Slam records tonight.

The 36-year-old Stosur is looking to win her eighth career Grand Slam title, while 33-year-old Ebden is aiming to win a second major when they face sixth seeds Rajeev Ram and Barbora Krejicikova in the Australian Open 2021 mixed doubles final.

Both know what it takes to win an Australian Open mixed doubles title too. Stosur did so in 2005 alongside Scott Draper, while Ebden shared the 2013 title with Jarmila Wolfe (nee Gajdosova).

The Aussie wildcards, who have teamed up for the first time this fortnight, have confidently defeated quality opponents to advance this far. Ebden describes their on-court chemistry as ‘natural’.

> READ: Refreshed Ebden excited to back on court

Determined to continue their winning run, Stosur and Ebden are aware of the major opportunity that awaits.

“It’s why we play for sure,” Ebden says of the importance of competing for Grand Slam titles. “People say it’s only mixed doubles. Sure, it’s not singles but … we certainly make the most of it, feel like it’s important and worth every effort.”

Stosur, who is unbeaten in her three previous mixed doubles finals, is competing in the 14th Grand Slam final of her illustrious career. Ebden is contesting his second.

“Anything can happen here, let’s be ready for anything,” Ebden says of their mindsets.

The sixth-seeded combination of Ram and Krejcikova are on a nine-match winning streak as a team at the Australian Open, having swept the 2019 title as well.

The 25-year-old Krejcikova’s own winning streak in mixed doubles matches at Melbourne Park is at 14, having won last year’s title with Croat Nikola Mektic. She is attempting to become the first woman in the Open era to win three consecutive Australian Open mixed doubles titles.

The 36-year-old Ram is aiming to win his third career Grand Slam title, while Krejcikova is hoping to win her fifth.

“Really excited to play,” Stosur says. “Hopefully (the women’s singles) is a great final, and hopefully everyone will stick around to try to watch two Aussies try to win one ourselves. Any Grand Slam final is great. To have another one here at home for both of us, in that arena after the women’s singles final, it’s going to be really exciting.”

“We’re the last Aussies standing. Hopefully they can stay and support us,” Ebden adds.