Australian wildcards Sam Stosur and Matt Ebden are through to the mixed doubles final at Australian Open 2021. 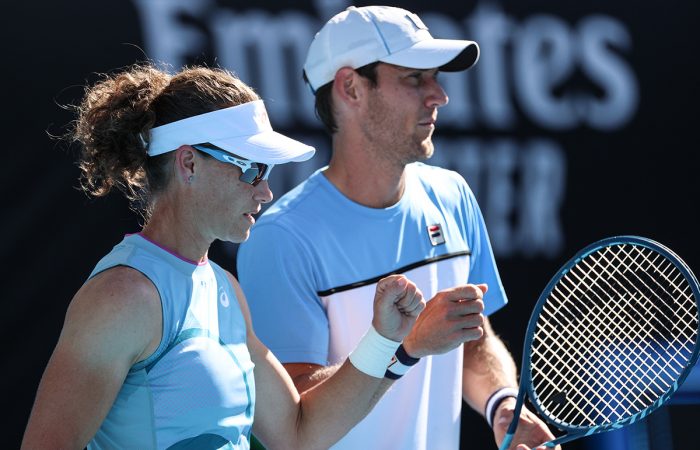 The Aussie wildcards are through to the mixed doubles final, earning their place with a 7-5 5-7 [10-8]  victory against Brit Joe Salisbury and American Desirae Krawczyk at Court 3 today.

There were a handful of breaks in the opening set of the fiercely-contested semifinal, but neither team could consolidate or build any advantage. It was the Aussies who struck in the late stages, breaking Krawczyk’s serve to love in the 11th game.

Serving for the set, a steely Stosur recovered from a 0-40 deficit to hold and take the opening set in 43 minutes.

Games went on serve in the second set, with both teams producing high-quality tennis. The only break was in the 12th game, with Salisbury and Krawczyk taking advantage of three double faults from Stosur.

The Aussies bounced back strongly in the match tiebreak, building a 6-1 lead. With a patriotic crowd at Melbourne Park cheering them on, Stosur and Ebden withstood a late charge from their opponents to close out victory after one hour and 40 minutes on court.

Stosur hit a brilliant return winner on Salisbury’s serve at eight-all in the match tiebreak, then Ebden dutifully served out a hard-fought victory.

“We got a really good start. Our game plan was just to stay aggressive and keep up good energy and do what we were doing well,” Stosur said of their approach to the match tiebreak.

This is a second Australian Open mixed doubles final for the 36-year-old Stosur and her first in 16 years, stretching back to her 2005 title-winning run with Australia’s Scott Draper. Including singles and women’s doubles, Stosur is now set to play the 14th Grand Slam final of her illustrious career.

It is also a second Australian Open mixed doubles final for 33-year-old Ebden, who won the 2013 title alongside Australian Jarmila Wolfe (nee Gajdosova) in his only previous major final appearance.

“Any Grand Slam final is great. To have another one here at home for both of us, (it is) going to be really exciting,” Stosur said.

Sixth seeds Rajeev Ram and Barbora Krejcikova await in tomorrow evening’s final. The American-Czech combination are on a nine-match winning streak as a team at Melbourne Park, having claimed the Australian Open 2019 mixed doubles title together.