World No.17 Fabio Fognini eliminates Australia's Alex de Minaur in the third round at Australian Open 2021. 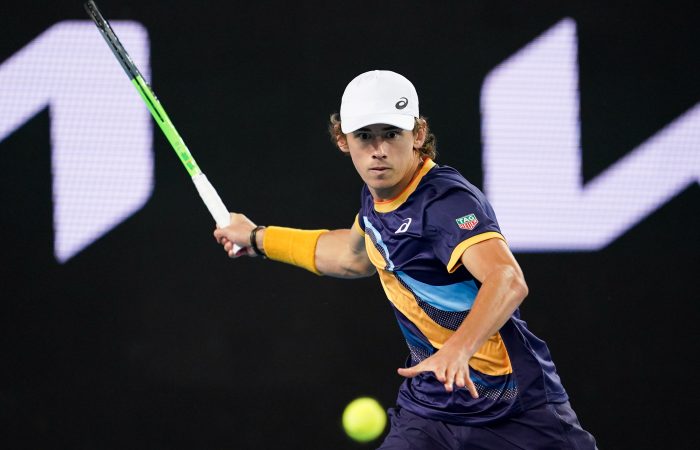 Alex de Minaur typically enjoys a serving of Italian – but not the kind he received tonight.

Rather than dining on delicious pasta or pizza, the 21-year-old Australian was served a masterclass from in-form Italian Fabio Fognini.

The world No.17 recorded a 6-4 6-3 6-4 victory at Margaret Court Arena, ending De Minaur’s Australian Open campaign in the third round.

“It’s one of those matches that you’re out there, you’re leaving it all out there, you’re doing everything you can, but you can just feel like he’s playing at another level,” De Minaur said. “You’re kind of just hanging in there, and, I mean, it’s tough.”

Fognini hit 25 winners to De Minaur’s 13, helping him score a comprehensive victory in their first career-meeting.

The 33-year-old Fognini snared the first break of the match, doing so in the eighth game. He couldn’t consolidate though, with De Minaur immediately breaking back to love.

But the Australian was struggling to dictate on serve and got broken again, allowing Fognini to take the first set in 38 minutes.

The No.16 seed was hitting the ball cleanly and switching from defense to offense with ease, helping him control the rallies.

De Minaur was desperately trying to find a way to curb Fognini’s momentum, but couldn’t find any answers again in the second set.

“He was playing at a very high level and not giving a lot,” conceded De Minaur.

“I couldn’t be too passive on the rallies because he was stepping in and dictating from the get-go.”

Broken to love in the opening game of the third set, De Minaur’s night was going from bad to worse.

Fognini couldn’t serve out the match at 5-2 in the third set, providing De Minaur with a glimmer of hope.

As Fognini’s unforced error count climbed, the Australian won three consecutive games. He couldn’t win a fourth though, with Fognini serving out victory on his second attempt after two hours and eight minutes on court.

This is the fourth time in his career that Fognini has advanced to the Australian Open fourth round.

De Minaur’s run equals his career-best result at the Australian Open, having also reached the third round in 2019.

“It’s good to, in a way, have these matches, because I can now sit down and see what I need to improve on,” De Minaur said.

“It’s a constant journey of improvement and I’m not satisfied where I am. I want to not come and make third round of a Slam and be content about it. I want to be pushing deep in Slams and pushing second weeks. Look, today wasn’t the day, but I’ll have more chances and I’ll definitely learn from this.”

Ash Barty is now the last remaining Australian player in a singles draw at this year’s Australian Open. The world No.1 advanced to the fourth round with a straight-sets victory over Russian Ekaterina Alexandrova tonight.