A gallant Alexei Popryin falls in another five-set match at the Australian Open, with Chris O'Connell also exiting in the second round. 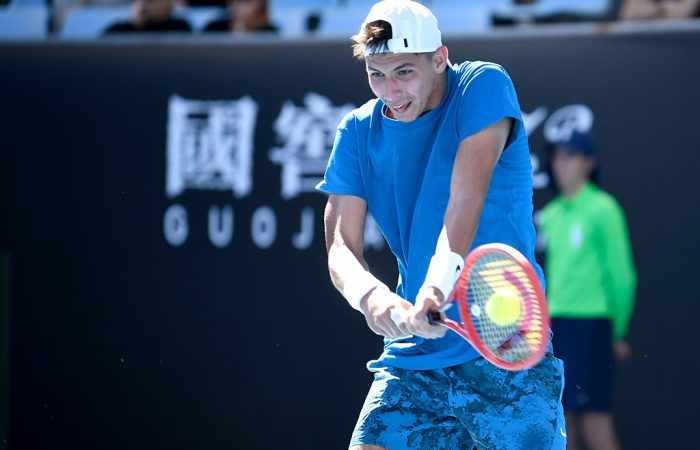 Australian Open 2021 has proved a tale of two-setters for Alexei Popyrin – after a heroic five-set victory over David Goffin in the opening round, the Australian today exited to Lloyd Harris in another marathon.

Sustaining the form that Popyrin required to save four match points against No.13 seed Goffin was always going to be difficult and while it existed in passages for the local favourite, Harris eventually emerged with a 6-2 1-6 6-3 6-7(5) 6-3 win.

In a ruthlessly efficient first set, Harris secure a double-break of serve to gain a 6-2 lead in just 25 minutes and while Popyrin virtually reversed that result as he claimed the second, the South African was happy to settle in at his favourite tournament.

A hard-to-read serve was particularly helpful for the steely Harris, who hit 25 aces to Popyrin’s 21 and saved two of the four break points that he faced. Harris also capitalised superbly as he created opportunities, including the lone break point that ultimately determined the course of the third set.

The high point for Popyrin was recovering from a 2-4 deficit to seize the fourth-set tiebreak and while an excited Court 3 crowd was primed for a repeat of the Australian’s fifth-set heroics over Goffin two days earlier, that victory had also taken a toll.

Harris was unruffled and Popyrin clearly tiring as he surrendered a break of serve in a marathon sixth game of the 43-minute decider.

The identical winner count – 49 for each player – highlighted the mostly even level, but Popyrin’s 57 errors would ultimately prove costly as Harris progressed to an Australian Open third round for the first time.

We've got a feeling we'll see a lot more of @AlexeiPopyrin99 in the years to come 👏#AusOpen | #AO2021 pic.twitter.com/uZzfW70rIE

Chris O’Connell also exited the Australian Open, falling victim to a clinical Radu Albot in the second round.

High on confidence after an upset of No.12 seed Roberto Bautista Agut in the first round, Albot showed his experience as he seized the first set in 27 minutes and soon extended that lead to two sets.

O’Connell, who record a career-best win over Jan-Lennard Struff on Tuesday, maintained composure to immediately claw back an early service break in the final set, with the outcome eventually determined in a hard-fought tiebreak.

Australian Open 2021 tickets are now on sale via Ticketmaster