Christopher O’Connell has scored his first top-50 win to advance to the second round at Australian Open 2021. 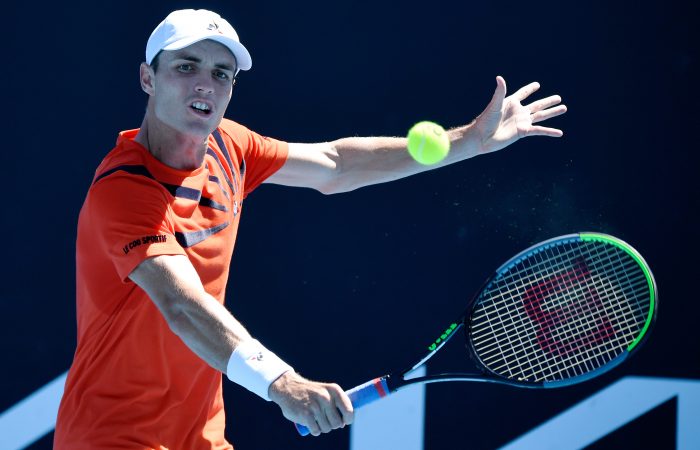 It was a case of third-time lucky today for Australia’s Christopher O’Connell.

Contesting the Australian Open main draw for the third time in his career, the 26-year-old from Sydney recorded his first win.

O’Connell had faced two top-20 ranked opponents in his first Australian Open appearances – and this draw was far from kind either.

At world No.37, Struff was one of the highest-ranked non-seeded players in the draw and entered the tournament in impressive form after scoring two top-30 wins at last week’s ATP Cup.

“I thought it was a pretty tough draw again,” O’Connell said. “But there could have been worse draws, there could have been easier draws. I mean, all matches are going to be tough no matter what player I get put up against. I was fortunate enough to watch a little bit of him in the ATP Cup.”

Far from overwhelmed, O’Connell’s winning performance also had nothing to do with luck.

The Australian wildcard earned his victory, firing 10 aces and 42 winners.

He played a near-perfect tiebreak in the opening set and then held his nerve to save a set point while serving at 4-5 in the second set.

“I just felt that my game lifted slightly,” O’Connell said of his strong finishes in the opening two sets. “I just made a few more returns in the tiebreaks, both sets. Really that was the slight edge.”

After taking a two-sets-to-love lead, he dominated the third set to close out a sensational victory after just over two hours on court.

“I felt like I just ran away with it a little bit in the third set,” O’Connell said.

The hard-working O’Connell achieved a career-high ranking of No.111 last season and has high hopes for even more breakthroughs in 2021.

“(I) still don’t think my best tennis has arrived yet,” he said. “It’s just taken me a longer time to figure out how to get these wins, feel confident out there, feel comfortable.”

O’Connell next faces world No.85 Radu Albot from Moldova, who upset No.12 seed Roberto Bautista Agut in the first round.

O’Connell is one of eight Australian men to advance to the second round at Australian Open 2021. He joins Nick Kyrgios, James Duckworth, Alexei Popyrin, Christopher O’Connell, Alex Bolt, Thanasi Kokkinakis and Bernard Tomic in reaching this stage. It is the best result in 18 years for local men.