Thompson bows out in Melbourne

Jordan Thompson exits in the Great Ocean Road quarterfinals, while Matt Ebden and John-Patrick Smith continue their progress in the doubles. 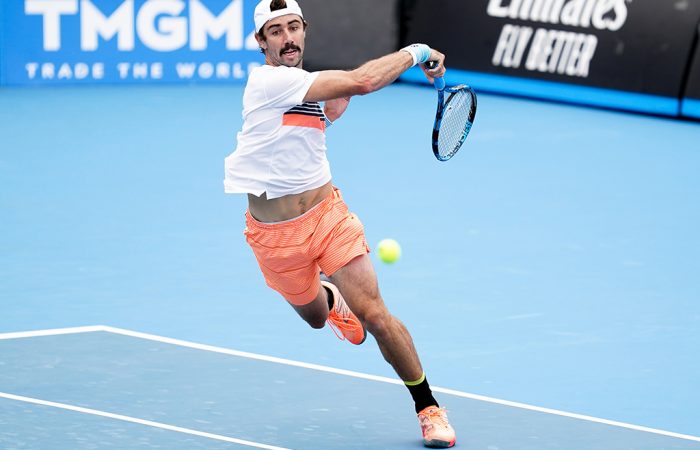 After a solid showing in the early rounds, Jordan Thompson couldn’t quite secure a place in a third ATP-level semifinal at the Great Ocean Road Open.

The Sydneysider defeated Mario Vilella Martinez, a 188th-ranked Spaniard, in their third-round match early in the day, before bowing up to Brazilian Thiago Monteiro in the quarterfinals.

In an exact reversal of their only other match at the Davis Cup qualifier last March, Monteiro secured a 6-4 6-4 victory.

“I have to play aggressive against him, otherwise he would have beaten me again,” the Brazilian related in a post-match interview.

“So I changed a little bit, tried to push a lot with my forehand. I served really well.

“I took my chances with the break points also, which was very good.”

Those break points were in fact the key for Monteiro. With his powerful forehand creating challenges for Thompson, the Brazilian secured breaks of serve in the seventh game of the first set and ninth game of the second.

Helped by six aces, the 26-year-old did not face a single break point in the one-hour, 22 minute encounter.

Still, there was significant positives for Thompson to take from his first 2021 tournament, the Australian earlier recording wins over Gianluca Mager and Pierre-Hugues Herbert.

“(This event is) very important. Before a Grand Slam, no one has played – well, most of the Aussies haven’t played any tennis,” Thompson commented after a three-set win in the second round.

“I haven’t played anything since October, November. Yeah, it’s good to be playing matches.”

Thompson will have his next opportunity in an eighth appearance in the Australian Open main draw, where No.27 seed Casper Ruud is his first-round opponent.

Other Australians, meanwhile, continue their progress at the Great Ocean Road Open.

Matt Ebden and John-Patrick Smith claimed a win over British players Luke Bambridge and Dominic Inglot in the second round of the doubles, setting up a quarterfinal against the Polish-Italian team of Hubert Hurkacz and Jannik Sinner.