Community spirit is high as Australian players train together ahead of their home Grand Slam. 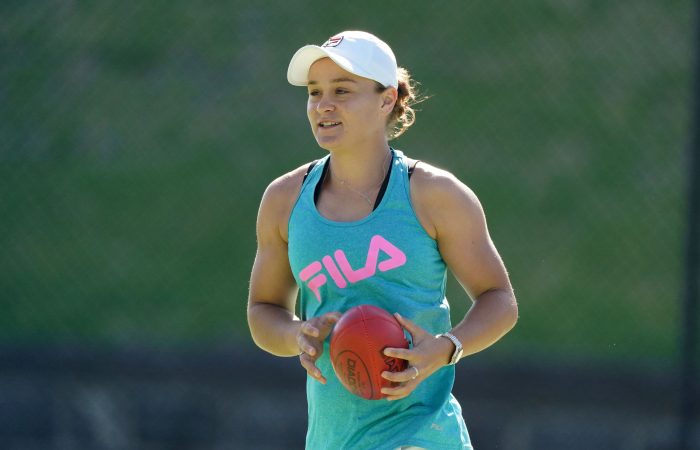 As the sun shines on a beautiful Melbourne morning, Australia’s top-ranked players are working hard on the tennis courts at Xavier College.

Destanee Aiava and Astra Sharma are hitting on one court. John Peers and Luke Saville have teamed up on another, playing a practice set against Alex Bolt and Matt Reid.

The high-intensity doubles match pauses as Maddison Inglis finishes her training session on a neighbouring court. There are cheers of support – and some friendly heckling too – as the 23-year-old plays competitive points against her coach.

World No.1 Ash Barty and Lizette Cabrera, who are waiting for a court, watch as well. They have just finished their warm-up, which involved kicking the footy and plenty of laughs.

Peers’ family, wife Danielle and young daughters Ellie and Harper, are on site too. Sister Sally Peers, a former pro, is playing with her nieces. When Arina Rodionova arrives, her husband and former AFL player Ty Vickery joins in.

Thanasi Kokkinakis, Chris O’Connell and Kimberly Birrell soon arrive for later practice sessions. They are all smiles as they greet their peers and other members of the extended Australian tennis community.

The mood is so relaxed, it’s hard to imagine the Australian Open is only weeks away.

“It creates a great atmosphere having everyone around,” notes Bolt, who is preparing to make his fifth consecutive Australian Open main draw appearance.

“To have Ash Barty, the world No.1, training on the court next to you is pretty cool too.”

Melbourne Park is currently a restricted zone, with the venue’s courts part of a biosecurity bubble set up to allow international arrivals to train while in quarantine.

For the Australian players who have not needed to quarantine, they are embracing the unique opportunity to prepare for a Grand Slam together.

They have been using three adjoining courts and the gym at Xavier College in Kew, as well as hard courts at Kooyong.

“Being able to train with all the Aussies in Melbourne has been awesome,” says the Queensland-based Cabrera.

“It’s been nice to be able to hit with different people every day. And because there are not as many courts, it feels really intimate.”

The supportive set-up has many advantages, according to Sharma.

“We’re getting really good practice and match play leading up to the AO,” says the West Australian.

“There’s quite a few coaches walking around too and giving advice, which is really nice. It does feel like a bit of a team environment.”

Barty is relishing the opportunity to train alongside her fellow Aussie players too.

“It’s very unique. It almost feels like a bit of a camp if I’m being honest,” says the world No.1.

“Obviously the Queenslanders, we typically train together, but now we’re seeing the Victorian players for the first time in a long time. A few of the SA boys are here, the New South Welshmen are trickling in as well.

“I think it’s been a really unique kind of week and also good to get some hitting variety. We all understand the situation that we’re in and we’re just trying to do all the right things.”