Bernard Tomic has sealed his spot in the Australian Open 2021 main draw, capping off a successful qualifying campaign with victory against compatriot John-Patrick Smith in Doha. 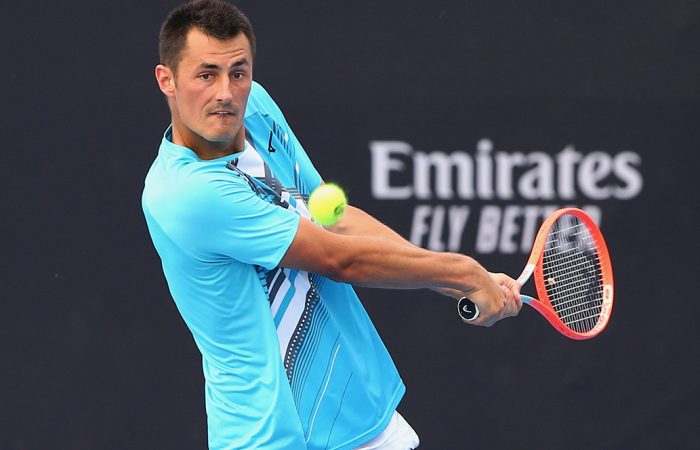 Bernard Tomic’s storied history at the Australian Open is set for another chapter.

Tomic won the AO boys’ singles title as a 15-year-old in 2008, becoming the tournament’s youngest-ever champion.

This, however, is the first time the 28-year-old has earned his place in an Australian Open draw as a qualifier.

The match – which was the first all-Australian showdown in the final round of an Australian Open men’s singles qualifying draw since 1992 – took two hours and 46 minutes to complete.

“He’s a dangerous player,” Tomic said of Smith. “He had nothing to lose, so today was tough.”

Both players navigated early momentum swings, before settling into a deciding set whether neither dropped serve.

Then for the third time in as many days, it was Tomic who came out on top in a third-set battle.

Tomic admitted he was feeling the physical toll of those three long matches – which included saving a match point in his second-round victory.

“I was fighting and competing for every point, but it was tough,” Tomic said. “I’d like to play a little more aggressive, but when the body is not there it is tough to play aggressive.”

This is the fourth time Tomic has qualified for a Grand Slam tournament in his career – having previously done so at Wimbledon in 2010 and 2011, as well as Roland Garros in 2018.

“I’m focused, I’m happy – anything can happen,” Tomic says of his chances at Melbourne Park next month.

Queensland teen Dane Sweeny’s major breakthrough has ended with a loss in the final qualifying round.

Ukrainian Sergiy Stakhovsky won a three-set battle against the 19-year-old wildcard, who scored a career-best win earlier this week in his Grand Slam-level debut.

Luck looked like it was on Sweeny’s side early, with the world No.794 claiming the opening point of the match with a net-cord winner.

Sweeny showed no signs of early nerves, playing with confidence and dictating play against his more experienced opponent. He took the opening set 6-2 in 46 minutes.

But world No.201 Stakhovsky refused to be rattled. The former world No.31 maintained his composure and cut down his errors. He lost only four points on serve in the second set, heaping the pressure on the young Australian.

Stakhovsky continued to dominate on serve in the deciding set, conceding a mere three points. It helped him close out a 2-6 6-3 6-1 victory after two hours and nine minutes on court.