From the tough tests of 2020, Ellen Perez emerged with perspective and resilience that will serve her superbly in the new season. 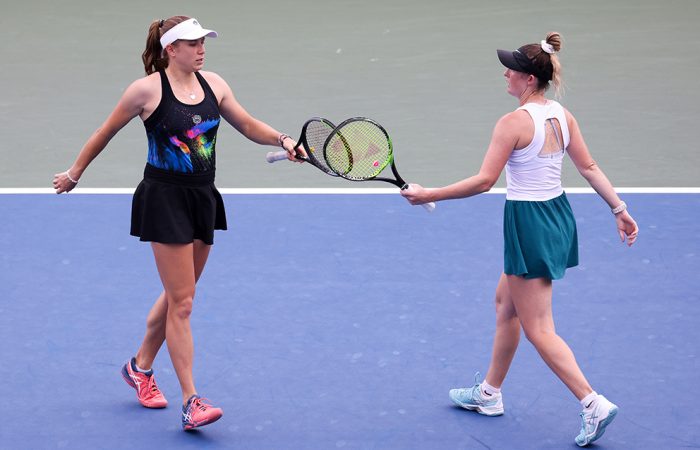 It’s hard to imagine that the disrupted 2020 season could be a turning point for many professional players. But Ellen Perez might well be the exception.

In a year in which international tours were abruptly halted in March and resumed in far more challenging circumstances in August, Perez climbed to a career-high top-40 doubles ranking, contested multiple WTA doubles finals and qualified for a trio of WTA singles tournaments.

And through it all, the hard-working competitor built on both the talent and the mindset that will almost certainly deliver more rewards in the future.

“I tried to make the most of the situation. Whenever there was an opportunity to play, I always felt like I was doing the right things – training hard and giving myself the best chance,” said Perez, who triumphed in three UTR Pro Tennis Series Sydney finals while the WTA Tour was suspended.

“When we went overseas, Storm and I had two good really doubles tournaments,” she said, noting progress to the Cincinnati quarterfinals and a runner-up performance in Istanbul as highlights.

“We played some really good points and we beat some good teams … (going) back-to-back in those kinds of conditions and situations, just being able to put together some good tournaments.”

With strict bio-securities protocols at tournaments and complicated travel requirements to arrive at them, Perez could see both positives and negatives of competing amid a pandemic.

“Obviously it was very different. There were some aspects that were harder and some that were easier,” she related. “There were no lines in the airport … it made it very quick through all those processes, which was really nice.

“But on the other hand, there’s a lot of paperwork or you might have to have a test 24 hours before flying into certain countries and getting exemptions, and all these different procedures.

“You had to be very pro-active in keeping on top of what the rules were.”

Perez did so with much-welcomed support, the Sydneysider explaining that she and Sanders “had each other’s back” when required.

“It was tough in the sense that you couldn’t take over Tennis Australia staff and when we were over there, we were on our own,” she said.

“The good thing is that me and Storm are very close, and we’ve got that relationship where it one of us needed some extra work, one of us was willing to do it.”

A tight network also helped on the return to Australia, with Perez spending the quarantine period in a Perth hotel with Daria Gavrilova and Sanders in close vicinity.

“I would say we pretty much flourished in quarantine,” Perez laughed, again showing her ability to make the most of difficult circumstances.

“It obviously wasn’t easy or a breeze, but I would say we had it better than most … Dasha and I had interconnecting rooms and you know, we’re both pretty interactive social people.

“We kept each other entertained, maybe drove each other crazy at times, but I think it was a lot easier having someone there.”

It was also a time to reflect on some important lessons from 2020, Perez noting the need for flexibility in rapidly changeable circumstances.

“Going with the flow was a big thing and just being adaptable because everything can just change day by day,” she said. “That was the biggest thing I realised.”

Still, the years working towards a professional tennis career – the big-hitting left-hander doing so via the US college system at the University of Georgia – had equipped Perez superbly.

“I’d say resilience is a major thing. I think a lot of tennis players come back from a lot of setbacks and you know some disappointments and things like that,” she shared.

“So I think we’re pretty good at dealing with whatever’s thrown at us. I think this year (2020) has really tested that, but I think most of us have really come out strong.”

They’re qualities that will no doubt be helpful as Perez starts her 2021 season in Dubai, where she’s one of eight Australian women competing in Australian Open qualifying.

With new highs achieved in doubles last season, singles is a priority – not that the level-headed Perez is keen to place a timeframe on her top-100 objectives.

“I don’t want to plan too far ahead,” she admitted. “I’m kind of just taking it day by day.”

It’s an approach that’s serving the 25-year-old well so far.

If 2020 was a turning point, 2021 could well be a time for greater opportunities.