Ellen Perez: Going with the flow

As she builds on her impressive momentum at UTR Pro Tennis Series events in Sydney, Ellen Perez is also showcasing the level-headed approach that’s shaped her steady career development. 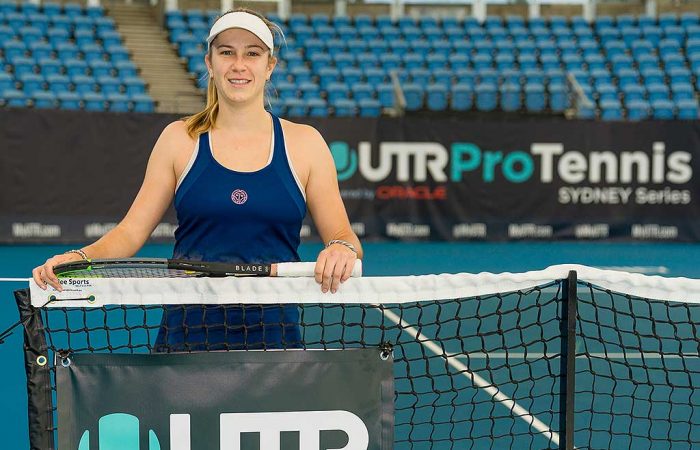 Sports management was the degree of choice when Ellen Perez gained a scholarship that enabled the talented young player to develop her tennis at the prestigious University of Georgia in America.

It seems a pertinent choice for the 24-year-old, who is managing her tennis career with both efficiency and a level-headed commitment – a situation that’s as true amid the challenges created by the COVID-19 pandemic as it has been in any other time she’s spent on tour.

“I mean I’ve always been a very laid-back, chilled out person and I know that times like this, with so many changes, it can be hard to adapt and deal with. But for me, I just enjoyed doing things that I didn’t get time to do in the past,” said Perez of recent months, in which she’s divided time between her usual training base in Melbourne and home in New South Wales.

For the Wollongong-born lefthander, the recent tour shut down has enabled rare time with her family ­– including parents John and Mitz, plus brother, Matt – and her boyfriend Jeremy Bourgeois.

“I’ve been able to start cooking a lot more,” laughed Perez, whose social media channels also show her spending time at the beach, playing with her dog Mya (a Samoyed) and interacting with other Australian players.

“I think it’s obviously very important to change things up. If you’re used to a routine and a certain schedule, in times like this it’s gone out the window.

“For me it’s just adapting and going with the flow. I think that’s been my recipe. I know that it’s harder for some people to do that than others.”

It’s an approach that has worked superbly for Perez in her return to professional tennis at the UTR Pro Tennis Series events currently underway in Australia.

Perhaps most pleasing for Perez is that her hard work in training has quickly translated to success in match play. Last weekend’s final, when she defeated Alexandra Bozovic 1-6 7-6(7) 10-7, marked the first set she’d dropped in two tournaments.

“I’m definitely taking some confidence from this … it’s nice to know my training block has paid off,” said Perez.

Claiming her first WTA title in the Strasbourg last year with Daria Gavrilova, Perez is also enjoying a clear sense of camaraderie as tennis returns in Australia.

“It’s great to see all the girls again,” she commented during the first UTR Pro Tennis Series event. “I obviously don’t situate myself in New South Wales all that often so to be able to see all these girls again and train and play them and whatnot, it is really nice.”

Having first taken up tennis as a three-year-old after receiving a totem tennis pole as a Christmas present, Perez is grateful to return to a competitive setting in Sydney – albeit with strict biosecurity protocols as officials carefully manage the ongoing coronavirus challenge.

“It’s obviously nice to be able to play in front of people and create a little bit more atmosphere but I think coming out and playing the second event after playing the first, you know what to expect and you’re fine out there,” said Perez, who is appreciative of the lengths taken to ensure a safe return to tennis.

“I think it’s welcomed by everyone, coming back to some match play and being around everyone again,” she commented.

That’s especially true as the 24-year-old settles into some pleasing form at Ken Rosewall Arena.

“I actually really enjoy being on the road and changing up the environment all the time. For me, I don’t really enjoy being in one spot for this long,” admitted Perez, who would typically be competing at overseas tournaments during winter.

“But it is nice that I am getting into a routine and used to everything. I’m really starting to enjoy it.”