Success on the doubles court in 2020 could provide some top Australian players with a springboard for further success in the new year. 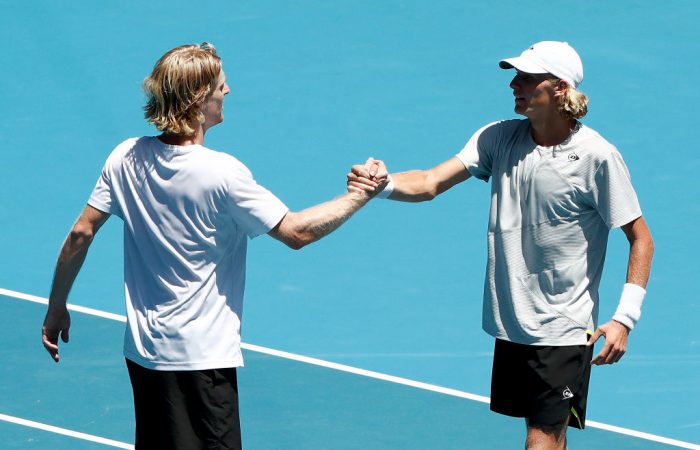 Alongside the challenges that top Australian players experienced in a disrupted 2020 season, there were also many encouraging milestones – and adding to the significance, many of those achievements occurred as a doubles duo.

Close friends Ellen Perez and Storm Sanders combined to reach the Cincinnati quarterfinals and finish runner-up in Istanbul, with each Australian woman achieving new doubles rankings highs by the end of the season.

For all of those players, success on the doubles court provides a springboard for further milestones in 2021.

Peers, who was runner-up at Wimbledon and the US Open with Jamie Murray in 2015 and claimed the Australian Open 2017 title with Henri Kontinen, now sees momentum building alongside Venus.

After contesting just three events together, Peers and Venus broke through to claim the Dubai title. On the tour resumption, they triumphed in Hamburg and at the European Open in Antwerp.

“We’ve actually had a pretty good year,” the 32-year-old told Todd Woodbridge from London, where Peers and Venus were the sixth team to qualify for the elite ATP Finals.

“We haven’t done as well as what we’d like in the Grand Slams, but to be able to win three titles our first year out and even with a massive break in the middle of the year (due to the tour shutdown) … we were excited and ready to push forward.”

While success for any new partnership is notable, it was particularly impressive that Peers and Venus gelled so well in the disrupted season.

Peers explained the considered decision of the new partnership. “I tried to figure out someone I would match well with, but also got on well with off-court,” he related in the Tennis Australia Facebook Live event.

“It was first of all ‘OK, how tennis-wise we match up and then after that, how can we keep developing our games going forward?’ Luckily enough, I’ve known Mike for years. We actually train together when we’re in London.

“It has been a very good year, development-wise I think for us if we look back on what we needed to know about ourselves as a team to be able to go forward in the bigger events.”

A strong off-court relationship also helped Purcell and Saville maximise a wildcard at AO 2020, where they were the first all-Australian duo to reach the men’s doubles final since Todd Woodbridge and Mark Woodforde 22 years earlier.

“I think we just really enjoy each other’s company. I really respect him as a player and a friend, so I kind of listen to everything he has to say,” Purcell related.

“We just always have the best time on court, and I think it shows in the results.”

Alongside the feel-good factor of achieving a career-best result alongside a close friend, there was also a practical element of success for Purcell and Saville.

The $190,000 they shared as runners-up to Rajeev Ram and Joe Salisbury provided valuable funds to invest into their overall career development.

“It helps out a lot,” Saville admitted. “It’s expensive to travel. As Max said, he’s hired a coach and I’m trying to bring in a coach and fitness trainer where I can as well.

“This is obviously an enormous payday for us and we’re going to put it all back into our tennis.”

The financial boost was accompanied by a mental one, Purcell and Saville both noting the confidence provided by wins over experienced teams, including two-time Grand Slam champions Horia Tecau and Jean-Julien Rojer.

“Obviously knocking off the top doubles team that definitely instils confidence on the singles court as well,” Saville noted. “It’s still tennis, still a tennis match. I can definitely get confidence from that.”

Perez, who achieved doubles peak of world No.40 in her impressive season, recognises how increased self-belief can also benefit her singles game.

“I think the biggest reason that my doubles is so successful is because I believe in my doubles, having a few good wins and being able to compete with those top girls,” the 25-year-old Sydneysider related.

“Just keeping myself around the tournament through doubles and practising with some of those girls and just getting wins it always gives you a little more confidence.”

Talking with Woodbridge in another Facebook Live event, the top Australian man agreed that his returns, volleys and performing under pressure were all helped by the doubles breakthrough.

“At the end of the day it all counts,” said De Minaur. “Basically, there’s nothing like playing matches. You can practise all you want – but the match situation, unless you get on the court and you’re playing someone in front of you (then) you’re not going to feel those nerves and those pressure situations.

“There’s nothing like going out there and getting those matches under your belt. “

It proved the perfect preparation for De Minaur, who progressed to a first Grand Slam singles quarterfinal at the US Open in his next tournament – further evidence, if any were required, that while tennis is a proudly individual sport, a team approach also provides a solid foundation for success.