Luke Saville and Max Purcell are excited to play in the Australian Open 2020 men's doubles final. 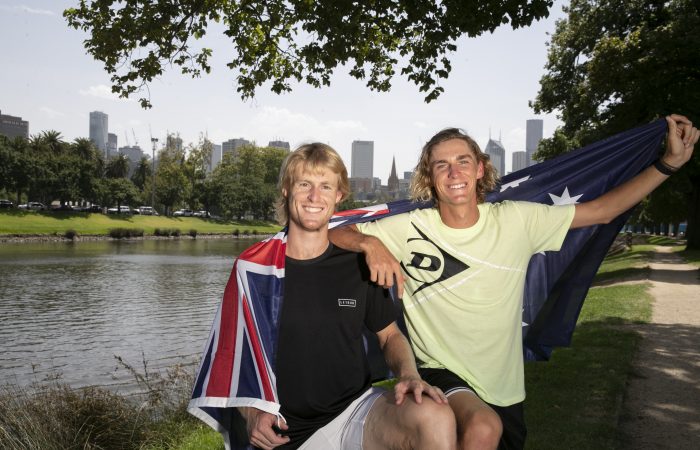 Wildcards Luke Saville and Max Purcell are within touching distance of Australian Open glory – and they still can’t quite believe it.

The duo will become the first all-Australian outfit in 23 years to claim the men’s doubles title if they beat the American-British pairing of Rajeev Ram and Joe Salisbury on Sunday.

Despite the occasion, the laid-back pair are taking it all in their stride.

“Starting out the week if you’d said we’d be in the final, we probably wouldn’t have quite believed it.

“We’ve always had belief in our games but to be playing off for the Australian Open, I live here, and in front of family and friends and doing it with my best mate – it’s been really good.”

“It's been a bit of a dream. We have never really had a real crack at a Grand Slam, and now we're sitting in a final. We're just thrilled.”

Saville enjoyed a stellar junior singles career, claiming the 2011 Wimbledon and 2012 Australian Open boys’ titles. Having watched on as now-fiancee Daria Gavrilova reached the fourth round of the women’s singles in 2016 and 2017, Saville is enjoying being involved in the pointy end of the action at Melbourne Park.

“I don’t really play tennis for the spotlight or anything – I play it because I love it,” he said.

“But it’s nice to get this exposure – obviously very chuffed and happy to have our names out there.

“Now we want to go one step further.”

Tennis can be a lonely sport – especially for Australians, who spend most of the travelling year far from home.

For Purcell and Saville, it’s made their partnership even more rewarding.

“We’ve just really found a lot of smiles on court with each other and really try to enjoy ourselves,” the 21-year-old Purcell said.

“And regardless of if we win or lose, we’re just happy we’re out there competing and I guess we love playing tennis as a sport and as a job.

“What could be better at the moment?”

Mark Woodforde and Todd Woodbridge were the most recent all-Australian pairing to win the men’s doubles at Melbourne Park back in 1997.