The season of giving

Australian players showed their hearts were as big as their games when 2020 became the season of giving during unprecedented disruptions to professional tennis. 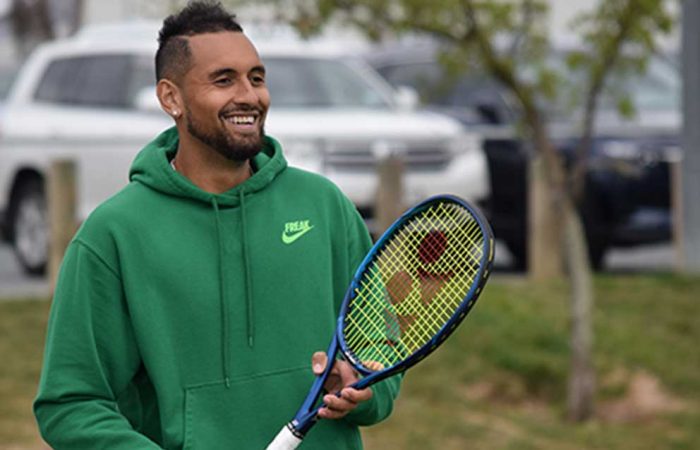 It might be one of the most commonly used terms in tennis, but “rallying” took on a whole new meaning during a challenging 2020.

And when the COVID-19 pandemic dramatically tested individuals and communities soon afterwards, top Australian players were equally quick to support the many people impacted.

Nick Kyrgios was prominent among that group, the 25-year-old instigating the Aces for Bushfire campaign that inspired similar generosity among the professional tennis community.

The enigmatic Canberran was also quick to show his compassion for anybody struggling during the pandemic.

“Please don’t go to sleep with an empty stomach,” Kyrgios wrote in a heartfelt Instagram post that attracted thousands of interactions.

“Don’t be afraid or embarrassed to send me a private message. I will be more than happy to share with whatever I have … I will drop it off at your doorstep, no questions.”

Kyrgios did exactly that, enlisting the support of his mother, Nill, to purchase and personally deliver goods valuing thousands of dollars throughout Canberra.

An ability to enlist others for a good cause was further highlighted through a partnership with Old El Paso, which launched with Kyrgios posting a video of himself playing tennis one-handed while eating an Old El Paso Tortilla Pocket.

Through the NK Foundation, Kyrgios subsequently donated 10,000 Mexican meal kits to Food Bank Australia, with an extra meal added for each share of the video. He then challenged players to take up the Mess Free Challenge.

Fellow Aussies Lleyton Hewitt, Sam Stosur and Matt Ebden were among the first to respond and it quickly expanded, with Andy Murray, Garbine Muguruza, Gael Monfils, Benoit Paire, Leander Paes and Eugenie Bouchard among the many prominent names who later participated.

I’m stoked by the support of my fellow Aussie athletes and so many of you sharing my #MessFreeChallenge video to help feed so many families here! Let’s go global. I wanna challenge @Andy_Murray, let’s see what he’s got…Over to you Muzz! @oldelpasouk #TortillaPockets pic.twitter.com/c4oSOW4lEr

“I’ve been encouraging everyone to have a go and it was amazing to see this go global,” Kyrgios commented of the campaign, that’s now seen more than 100,000 products and meals distributed to food banks and families in countries including Australia, USA, United Kingdom, Canada, France, Spain, Switzerland, Spain, United Arab Emirates and Puerto Rico.

“It’s been great to have the support of so many pros to get behind this cause and let us give back together.”

Ash Barty and Pat Rafter, meanwhile, served up gratitude and inspiration when they visited Brisbane’s Royal Brisbane and Women’s Hospital in May to thank frontline healthcare workers for their efforts during the COVID-19 pandemic.

“There were a lot of people and a lot of unsung heroes who are going unnoticed at the moment who are doing a lot of work to keep us safe, keep the community safe and to keep us tracking in the right direction,” said Barty.

Participating in a school assembly, helping launch a new roof at the Cairns International Tennis Centre and showcasing tennis as a safe sport, the players relished their time in the local community.

“This is what tennis is about in my opinion, I remember the joy the game gave me when I was a little kid,” said Millman. “Hopefully we can inspire the next generation to pick up a racquet and introduce them to a game that has taken us many places.”

Barty, who remained in Australia after the professional tours resumed in August, explained how the global pandemic had provided a different perspective.

“I think it’s been a time that’s brought us together more as human beings as opposed to just worrying about our profession and our sport,” Barty related.

Ash Barty, John Millman, JP Smith and Lizette Cabrera have landed in Cairns to promote the safe return of tennis to the state and show their support to the local community.

“This funding provides an opportunity, not just in tennis, but in education, and in experiences,” Barty related. “It’s really special to be able to give people of all ages that opportunity to grow and learn about how much sport has to offer in the way of connecting people and communities.”

A connection to his local community was also at the heart of Smith’s decision to delay his return to the professional tour and instead support the development of players in his hometown of Townsville.

Following the passing of his childhood coach Wayne Hannah, it was a natural progression for the community-minded Smith to step up for Tennis Townsville.

“Wayne was always a guy who encouraged you to play tennis and loved the sport, so he’ll want us to kind of continue his legacy there,” Smith related.

“I’ve stepped into the role to help out as much as I can while we try and piece it all together. It’s really tough to replace someone as great as Wayne.”

Jaimee Fourlis, meanwhile, recognised a chance to support others as she recovered from shoulder surgery.

In October, the 21-year-old Melburnian participated in the Black Dog Institute’s One Foot Forward campaign to raise funds to support mental health and research.

“I’m just trying to do my little bit,” said Fourlis. “If people want to donate that is awesome, but it is also great just to help spread the word and raise awareness.”