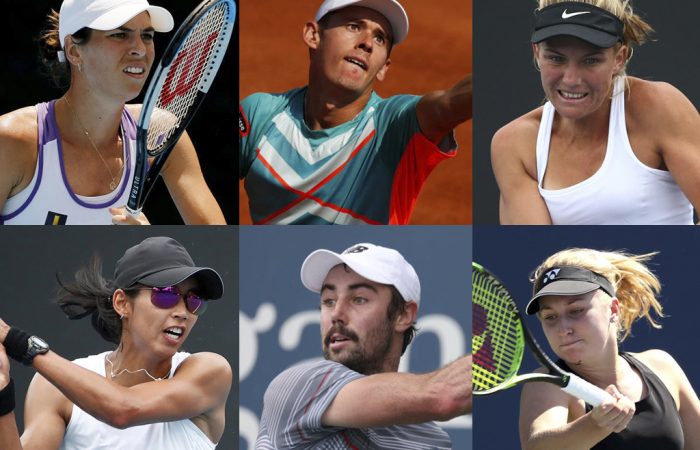 The final Grand Slam tournament of the year begins in Paris today, with six Australians scheduled to play their first-round singles matches at Roland Garros.

This includes Australia’s top-ranked man Alex de Minaur, who advanced to a first major quarterfinal at the US Open earlier this month. The No.25 seed is looking to maintain his impressive form against Italian qualifier Marco Cecchinato and progress to the French Open second round for the second time in his career.

“It’ll be tough, but I’m looking forward to seeing where I am, testing myself out and having a battle out there,” De Minaur says of the match-up.

“I’ve played him on clay before, he got the better of me and now it’s hopefully time to get my revenge.”

The four Australians in the women’s singles draw – Ajla Tomljanovic, Maddison Inglis, Daria Gavrilova and Astra Sharma – all play on day one.

Roland Garros is typically held in late May, but was moved this year due to the COVID-19 pandemic. It means players need to adapt to cooler and heavier conditions at the outdoor clay-court event.

[LL] Astra Sharma (AUS) v Anna Blinkova (RUS)
Women’s singles, first round, Court 10, first match (7pm AEST start)
Sharma, a 25-year-old from Perth, is making her second main draw appearance in Paris. After filling a lucky loser place in the draw, the world No.134 is hoping to take advantage of the opportunity against the No.59-ranked Blinkova. The 22-year-old Blinkova, who made the third round in her Roland Garros main draw debut last year, would become Sharma’s highest-ranked win at Grand Slam level. This is their first career meeting.

Maddison Inglis (AUS) v [27] Ekaterina Alexandrova (RUS)
Women’s singles, first round, Court 12, first match (7pm AEST start)
A season of firsts continues for 22-year-old Inglis, who is making her French Open main draw debut. Can the world No.124 from Perth add a career-first top-50 win to that list? That’s her goal when she faces world No.31-ranked Alexandrova. The 25-year-old Russian, who has scored wins against Grand Slam champions Garbine Muguruza and Kim Clijsters this season, is making her fourth main draw appearance in Paris.

Ajla Tomljanovic (AUS) v [20] Maria Sakkari (GRE)
Women’s singles, first round, Court 14, first match (7pm AEST start)
The No.64-ranked Tomljanovic lists 25-year-old Sakkari as one of her best friends on tour. The occasional doubles partners have played once before, with Sakkari scoring a three-set win in 2017. The No.24-ranked Sakkari is in good form, making the US Open fourth round earlier this month. However the 27-year-old Tomljanovic thrives on clay, recording her best Grand Slam result in Paris with a fourth-round run in 2014.

[25] Alex de Minaur (AUS) v [Q] Marco Cecchinato (ITA)
Men’s singles, first round, Court 9, second match
De Minaur begins his fourth Roland Garros campaign against a qualifier with impressive clay-court credentials. The No.110-ranked Cecchinato made the semifinals in Paris in 2018, defeating two top-10 seeded opponents as well as Novak Djokovic in a career-best run. That performance helped his ranking peak at No.16. The 21-year-old De Minaur leads their head-to-head record 3-1, however the 27-year-old Cecchinato won their only previous meeting on clay last year.

Jordan Thompson (AUS) v Radu Albot (MDA)
Men’s singles, first round, Court 10, third match
After posting a career-best Grand Slam result with a fourth-round run at the US Open earlier this month, the 26-year-old Thompson is hoping to continue his momentum on Parisian clay. The No.54-ranked Thompson, who is making his fifth Roland Garros appearance, faces No.79-ranked Albot. This is his first career meeting with the 30-year-old Moldovan, who achieved a career-high ranking of No.39 last year.

Daria Gavrilova (AUS) v [24] Dayana Yastremska (UKR)
Women’s singles, first round, Court 12, fourth match
Continuing her comeback from a foot injury, the 26-year-old Gavrilova has drawn No.28-ranked Yastremska. Gavrilova, who lists clay as her favourite surface, won her only previous meeting against the 20-year-old Ukrainian last year. This is Gavrilova’s second tournament in her return. She won four matches at an ITF tournament earlier this month, showing promise she can rediscover the form that helped her reach the top 20 in 2017.