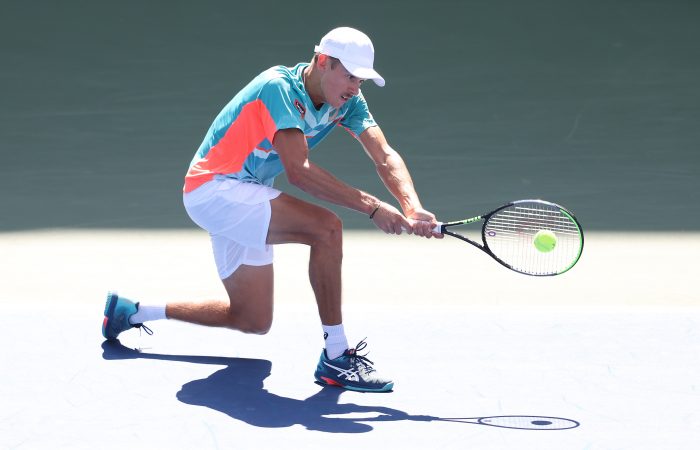 Alex de Minaur is determined to continue his career-best run at the US Open.

The 21-year-old Australian has advanced to a Grand Slam quarterfinal for the first time and now meets second seed Dominic Thiem.

Thiem has won his two previous matches against the No.28-ranked De Minaur. The 27-year-old Austrian scored a three-set win in the US Open first round in 2017 and won in four sets in a Davis Cup tie in 2018.

It means De Minaur knows what to expect against the three-time major finalist, noting his “immense firepower”.

“It’s going to be a match where I’m just going to have to try to stand my ground again, do what I do best, stay solid, and look for any kind of opportunity I can to dictate,” said the No.21-seeded Australian, who has won four of his past seven matches against top-10 opponents.

While Thiem will look to dominate off his powerful groundstrokes, De Minaur will rely on his athleticism to wear down the world No.3.

“If I could definitely blast people off the court, then trust me, I would rather do that. This running thing gets tiring, that’s for sure,” said De Minaur.

“Look, I’ve got to deal with what God gave me. He didn’t give me the best physique, I’m not as strong or as tall as other people so I have to find ways to win. That’s the way I win.

De Minaur has shown that fighting spirit to navigate a difficult draw so far in New York.

He overcame US Open 2013 semifinalist Richard Gasquet in four sets in the second round, then recovered from a two-sets-to-one deficit for only the second time in his career to defeat No.11 seed Karen Khachanov in the third round.

After those two victories against former top-10 ranked opponents, De Minaur produced his best tennis of the tournament to eliminate in-form Canadian Vasek Pospisil in straight sets in the fourth round.

“I didn’t have the highest confidence coming in, so it’s kind of just been building,” said De Minaur of his form.

“I have just tried to gather some momentum. I ended up playing some good tennis against quality players. So hopefully I can just keep that going.”

Thiem, the highest-ranked man left in the draw, carries impressive momentum into the match too. He has lost only one set so far this tournament, against US Open 2014 champion Marin Cilic in the third round.

He knows De Minaur will present a tough challenge.

“(Alex is) definitely one of the fastest players on tour. I think that he also is moving not only super fast, but also very accurate,” Thiem noted ahead of their showdown.

“He improved massively, especially last one and a half, two years I would say. So I’m looking forward to that one … it’s going to be a great encounter.”

[21] Alex de Minaur (AUS) v [2] Dominic Thiem (AUT)
Men’s singles, quarterfinal, Arthur Ashe Stadium, night session, second match (approximately 10.30am AEST)
> Both players are seeking to reach a first US Open semifinal. Alex de Minaur’s previous best result in New York was a fourth round run last year, while Dominic Thiem matches his 2018 quarterfinal run.
> Thiem has an 18-6 win-loss record at the tournament, while De Minaur’s stands at 8-3.
> De Minaur is hoping to record his fifth career top-10 win and first against a top five-ranked player.
> The last Australian man to progress to a Grand Slam singles semifinal was Lleyton Hewitt at the US Open in 2005.