Australia’s Alex de Minaur continues winning run at the US Open, defeating Canada’s Vasek Pospisil in the fourth round. 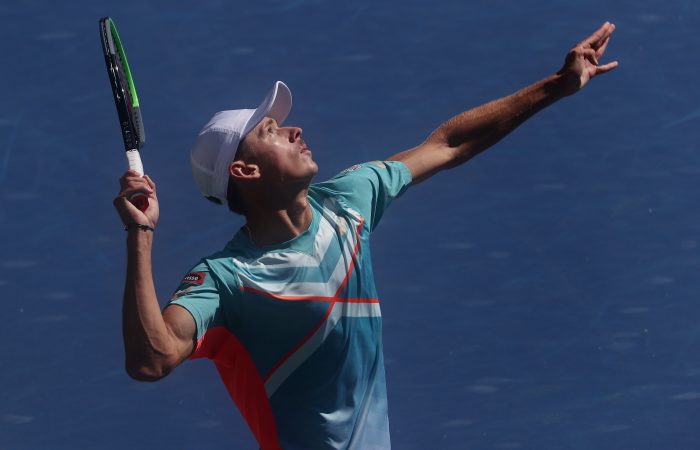 Alex de Minaur is through to the US Open quarterfinals.

“I’m obviously very happy,” De Minaur said. “This is where I want to be, and this is where I truly believe I belong – second weeks of Slams and going deep. I’m happy I’m finally at this stage.”

It was a solid performance from De Minaur, who hit eight winners and just three unforced errors to claim a tight opening set in a tiebreak.

Pospisil fired 22 winners in the first set, but De Minaur’s remarkable retrieving and court coverage intensified the pressure on the world No.94. It saw the Canadian tally 16 unforced errors, with De Minaur proving unflappable against his constant attack.

This was evident in the tiebreak, where the No.21-seeded De Minaur calmly saved four set points to recover from a 2-6 deficit.

“That first set was crucial,” De Minaur said. “The momentum definitely changed after that.”

Neither player faced a break point on serve until the second set. The No.28-ranked De Minaur struck first, snaring a double break to race ahead 5-1. Pospisil managed to get one break back, but could not stop the Australian from taking a two-sets-to-love lead.

De Minaur maintained control early in the third set, winning a run of 11 consecutive points to build a 3-1 lead. The Australian’s exceptional returning was frustrating Pospisil and preventing him from dictating points.

After two hours and 17 minutes on court, De Minaur closed out victory to charge into his first major quarterfinal. His previous best Grand Slam result was a fourth-round run at last year’s US Open.

De Minaur committed just 13 unforced errors for the match, while his opponent finished with 48. The Australian was broken only once and won 80 per cent of points on his first serve.

The impeccable performance sees De Minaur become just the second Australian man in the past 14 years to reach the US Open quarterfinals, matching John Millman’s effort in 2018.