With a third straight match win at Flushing Meadows, Jordan Thompson is in new Grand Slam territory at the US Open. 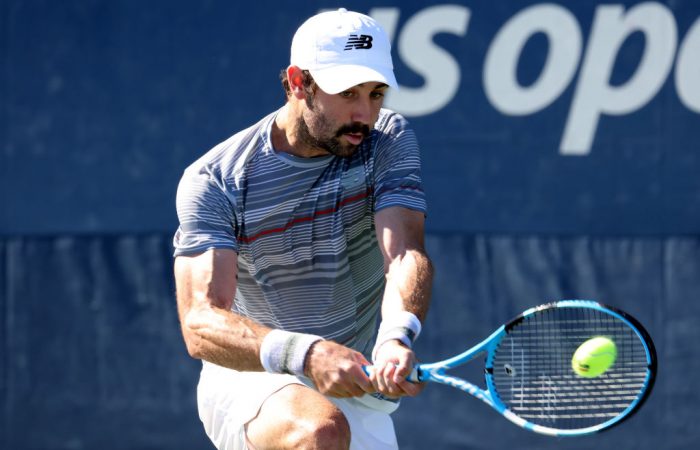 Jordan Thompson has progressed to the second week of a Grand Slam for the first time in his career after a 7-5 6-4 6-1 victory over Mikhail Kukushkin.

Following earlier wins over Stefano Travaglia and Egor Gerasimov at Flushing Meadows, the 26-year-old from Sydney set up a fourth-round match with No.27 seed Borna Coric.

Contesting the US Open main draw for the fifth time in his career, Thompson has clearly benefited from his hard work in training during the extended break from the tour.

While frustrated at times early on, the Australian was clearly the fresher player as the two-hour 23-minute encounter was completed in sapping New York conditions.

Thompson had progressed in four-sets in each of his earlier encounters, while Kukushkin took almost four hours to upset No.13 seed Cristian Garin in the previous round.

After exchanging service breaks midway through the first set and to open the second, Thompson claimed each of those sets with further breaks on the Kukushkin serve.

Thompson won six of 13 break points in total, most decisively running away with the 39-minute decider.

After winning seven straight games Thompson surrendered a first match point while leading 5-0 in the final set, before securing victory with his 11th ace the following game.

The Australian was helped by 27 winners overall, with Kukushkin’s 44 unforced errors clearly damaging.

The world No.63-ranked Thompson, who peaked at No.43 in July 2019, has adapted superbly to the unusual circumstances of the 2020 US Open.

The Grand Slam is being contested without fans due to the COVID-19 pandemic, with players largely confined to their hotels or in strict conditions on site at Flushing Meadows.