Australia’s Jordan Thompson is hoping to advance to a Grand Slam fourth round for the first time. 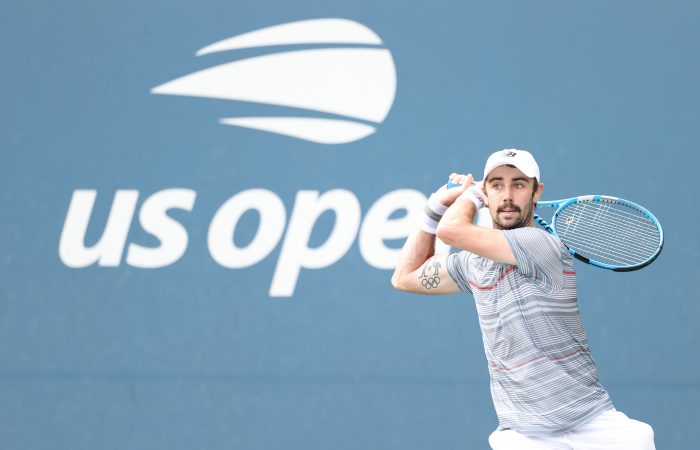 Jordan Thompson has never shied from hard work – and his diligence is now delivering major rewards.

The 26-year-old returned home to Sydney when the COVID-19 pandemic shutdown professional tennis in March. While many peers took some time off during the tour’s suspension, Thompson used it as a ‘six-month training block’.

“I focused on the gym. At the start I was still hitting every second day and then it moved to five days a week,” Thompson explained to Todd Woodbridge in a Tennis Australia Facebook chat earlier this week.

“I was working pretty hard.”

That dedication has shown in New York this week, where the No.63-ranked Thompson has advanced to the third round for the first time.

READ: Thompson storms into US Open third round

It sets up a third-round meeting with Mikhail Kukushkin of Kazakhstan. The world No.90 upset No.13 seed Cristian Garin in a five-set second round battle that lasted almost four hours.

“He’s a quality player,” Thompson told AAP of his next opponent.

“He’s been around for a long time. He’s got really good feel, great groundstrokes. He’s just really solid. So it’s going to be a battle.”

The 32-year-old Kukushkin has twice made a Grand Slam fourth round, most recently at Wimbledon 2019.

Thompson is hoping to reach the second week of a major for the first time. His previous best result was a third round run at Roland Garros in 2019.

“I’ve just got to look at it as another match and take it point by point,” said Thompson.

Thompson is one of two Australians on the day five schedule, with John Peers also featuring in men’s doubles action.

Jordan Thompson (AUS) v Mikhail Kukushkin (KAZ)
Men’s singles, third round, Court 11, third match
Enjoying a career-best run at the US Open, No.63-ranked Jordan Thompson next plays No.90-ranked Mikhail Kukushkin. The 32-year-old from Kazakhstan is into the third round in New York for a fifth time, and like his 26-year-old opponent, is hoping to advance to the fourth round at this tournament for a first time. Kukushkin, who defeated No.13 seed Cristian Garin in the second round, won his only previous meeting with Thompson via retirement at Indian Wells in 2017.

John Peers (AUS)/Michael Venus (NZL) v Sander Gille (BEL)/Joran Vliegen (BEL)
Men’s doubles, second round, Court 7, fourth match
Australian John Peers, who is enjoying a new partnership with New Zealand’s Michael Venus this season, is one win away from a fourth doubles quarterfinal appearance in New York. The duo, who are both 32, have an edge in experience against their next opponents. Although 29-year-old Sander Gille and 27-year-old Joran Vliegen are only contesting their second US Open, the Belgian combination proved why they won three ATP titles together last season in an upset of the second seeds and US Open 2018 finalists Lukasz Kubot and Marcelo Melo in the first round. This is the first meeting between these two teams.

> Check out the full US Open day five schedule