As he celebrates a milestone birthday, Alexei Popyrin is already showing a maturity far beyond his 21 years. 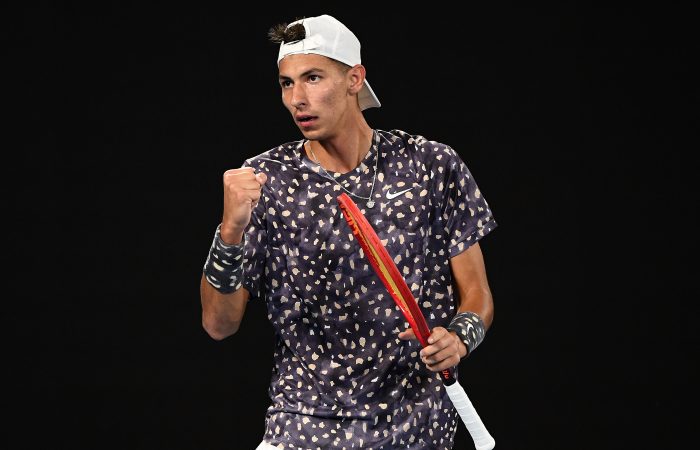 Fans and close observers could be excused for wondering – is Alexei Popyrin really turning just 21?

The 196-centimetre Popyrin has, after all, been making headlines since he became only the fifth Australian male – and the first in 49 years – to claim the French Open boys’ title in 2017.

Moving on immediately to the professional tour after achieving that milestone, the teenage Popyrin soon showed a maturity far beyond his years.

At an age when many players are still striving to contest their first main draw events, the Sydney-born Popyrin has already won singles matches at every Grand Slam, reaching the third round of both the Australian Open and US Opens last year.

Even the exits have been impressive for Popyrin, who stretched eventual semifinalist Lucas Pouille to  five sets at Australian Open 2019. And after earning a first Wimbledon main draw appearance through qualifying, he pushed world No.13 Daniil Medvedev to four hard-fought sets in the second round.

The confident early steps in the highest-stakes settings reflected a passion his childhood idols helped instil. The Sydneysider chose a future in tennis over soccer as a 10-year-old – reportedly after visiting a ‘height doctor’ and learning he would grow too tall for the latter – and was heavily influenced by superstar heroes including Jo-Wilfried Tsonga.

Talking with Stefanos Tsitsipas on the world No.6’s A Greek Abroad podcast, Popyrin revealed how he modelled his game on the Australian Open 2008 finalist.

“I was lucky enough to see his rise in the Aussie Open, how he made it all the way to the finals. I was there on the other side of the TV cheering him on,” said Popyrin.

“He and Fernando Gonzalez and (Juan Martin) del Potro were my favourite players. Just the way they all played the game (with) aggressive, big forehands – that was the way I wanted to play, and that’s the way I see myself playing.”

Popyrin was therefore bitterly disappointed when a first match against Tsonga ended with the Frenchman retiring with injury in the Australian Open 2020 first round.

“It was probably the toughest experience that I’ve had as a tennis player,” he told Tsitsipas. “I don’t usually cry on court or anywhere, but I was really close to breaking down in tears because he was somebody who was inspiring to me.”

While Tsonga’s trademark victory celebrations are another part of his game that Popyrin would love to one day emulate, it’s clear he already possesses his idol’s ability to thrive on a big stage.

“In Grand Slams I feel at home,” Popyrin declared on his way to another third-round appearance at Melbourne this year.

“I felt at home from the first Grand Slam last year, Aussie Open. I think it’s all about experience that comes together. It’s paying off right now.”

A mature approach on the court is also valuable off it, with the level-headed Popyrin carefully constructing a schedule that prioritised overall development over ranking gains.

With a strategy to “always play up” the relative newcomer resisted the temptation of chasing points and potential titles on the ATP Challenger Tour, focusing instead on qualifying for higher-level tournaments.

“It’s always a learning curve, always a learning experience. When I lose in ATP tournaments, for example, main draws, or even in qualifying, it always gives me something to learn, something that I can take out of it,” said Popyrin, who equalled a record held by Mischa Zverev as he qualified for a tour-leading 10 ATP events in 2019.

“I’m not saying that in Challengers you don’t learn, but it’s playing that step up, getting used to it, knowing what you’ll be expecting.”

Rewarded with a first ATP-level quarterfinal at Atlanta and a peak ranking of world No.87 in July last year, Popyrin is also demonstrating how a wise-beyond-his-years outlook extends beyond the game.

The professional tour shutdowns created by the COVID-19 pandemic created time for reflection for Popyrin, who returned to his training base near the Mouratoglou Tennis Academy in Nice, France, after the cancellation of Indian Wells.

Spending the lockdown period with his grandmother, parents, younger sister and his girlfriend, Popyrin also drew on valuable perspective.

“It actually gives me a better chance to be with my family. That’s one of the positives that came out of this virus,” he said. “I get to spend more time with my family and more than usual. It’s something that I’ve been wanting.”

The Ultimate Tennis Showdown in France, an event created by superstar coach Patrick Mouratoglou and Alexei’s own father Alex, also gave him a chance to compete while the ATP Tour was suspended.

With fun innovations including quarters instead of sets, coaching time-outs and player nicknames – Popyrin known as “The Sniper” – there was also a chance to compete against high-profile opponents including Tsitsipas, Matteo Berrettini, Richard Gasquet and David Goffin.

“I think that’s what I learnt the most, that my game and the way I play right now is suitable for that high level,” he commented.

And alongside talent and work ethic, there’s also a fierce passion too for competition – as Popyrin realised when he returned to the court in the Ultimate Tennis Showdown.

“Honestly I think I missed that the most,” he reflected of his time away from tennis. “No matter what format it is, I think just being out there and competing was really great for me mentally.”

As he contemplates his next steps on the professional tour, Popyrin is in many ways perfectly positioned. With impressive milestones accumulated, there’s also a certain absence of pressure.

At just 21, the fast-rising Australian can confidently progress with the freedom of time.