After the COVID-19 pandemic stalled his impressive season start, Alex Bolt is looking forward to a tour return. 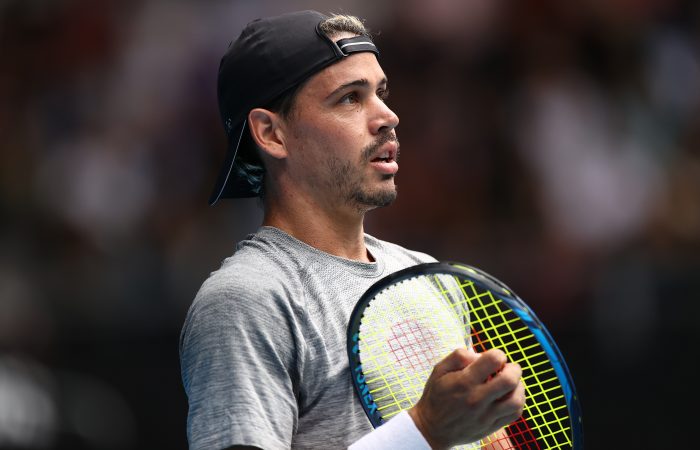 As anticipation builds for the return of professional tennis, Alex Bolt cannot hide his excitement.

The world No.146 hopes to compete at the US Open later this month and then plans to travel to Europe as a disrupted season restarts.

“I’m hoping I can get in (to the US Open main draw),” Bolt says. “I’m still a few out, so I need some people to pull out hopefully. Then there’s tournaments on throughout Europe, so I’m trying to get ready for those.”

The 27-year-old is determined to recapture the sensational form that took him to new heights earlier in the year.

A first ATP-level quarterfinal at the Adelaide International was an early 2020 highlight, with the local wildcard scoring a straight-sets win over world No.37 Jan-Lennard Struff in the second round.

Bolt posted another top-50 win at the Australian Open, defeating world No.42-ranked Spaniard Albert Ramos-Vinolas in a five-set thriller in the opening round. He then pushed world No.5 and eventual finalist Dominic Thiem to five sets in his next match.

The big-serving lefthander continued his good form at ATP Challenger level in February, reaching a final in Launceston and quarterfinal in Burnie. After qualifying for an ATP tournament in Acapulco, Bolt was promoted to the Australian Davis Cup team. He became the 112th player to represent Australia in the prestigious team competition.

The tour shutdown prevented Bolt from building on this momentum though, instead spending months training in Melbourne.

“That’s about pretty much all I’ve been able to do, just train and try to get ready for the tour to reopen,” Bolt says of his COVID-19 lockdown experience.

“It has been tough not knowing when the tour was going to resume and trying to find the motivation to be able to train and keep coming back to training day in, day out.”

Bolt took part in the UTR Pro Tennis Series in early July, making the final of the Melbourne event.

“These UTRs have come at a great time. It gives people a chance to play matches. You can do as much training as you want, but nothing can replicate what you do in a match,” he says.

“It’s also been good prep for the tournaments coming up as well, having something to train for and all this match practice we get from them is really beneficial.”

Bolt has since returned to his home state of South Australia, where he is completing a final training block at the Memorial Drive Tennis Centre ahead of the ATP Tour’s resumption later this month.

“You can’t beat mum’s cooking and it’s always great to be around friends and family,” says the Murray Bridge-born Bolt. “It’s something I don’t get to do often throughout the year, so I’ve just been trying to make the most of it.”

Motivation on the practice court is not lacking either, especially with Bolt’s competitive return only weeks away.

“Now there is a little bit more clarity, it’s really good,” he says. “We have some positive signs going forward.”