World No.1 Ash Barty is delighted to spend time in the Cairns tennis community with John Millman, Lizette Cabrera and John-Patrick Smith. 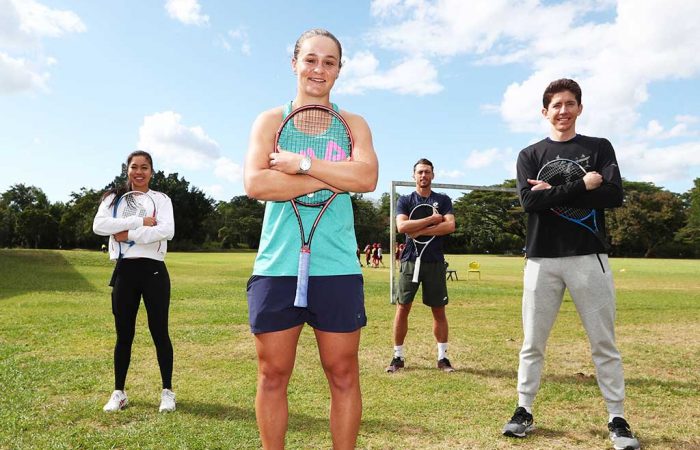 In Cairns to visit schools and spend some time in the local tennis community, world No.1 Ash Barty is clearly in a happy place.

“It’s really nice to be able to come back again and kind of try and create a bit of a positive impact for the community,” said Barty, who first visited the North Queensland city with her idol, Evonne Goolagong Cawley in October last year.

On this trip, Barty is accompanied by Australian players John Millman, Lizette Cabrera and John-Patrick Smith.

As she participated in an assembly at the Edge Hill State School today, Barty was pleased to be in the company of her fellow Queensland professionals, Mayor Cr Bob Manning OAM and scores of excited children.

The spirit of camaraderie, said Barty, is especially important given the challenges that communities have recently faced amid the COVID-19 pandemic.

“It’s been a difficult period for everyone without a doubt and I think it’s been a time that’s brought us together more as human beings as opposed to just worrying about our profession and our sport,” said the 24-year-old, who noted the silver linings in the suspension of international tennis tours.

“I think for me it’s just been really nice to be at home and to spend time with my family, we’ve all been safe and well thankfully, and you know, we’re grateful that we’ve still got the opportunity to train, play and prepare as best as we can.”

While maintaining fitness and spending plenty of time on the practice court, Barty is managing her return to professional tours carefully.

“I’m very lucky to be able to play tennis as a profession and as a sport for a living, but I know there are some bigger things in life that I need to look after first and for me that’s the priority,” said the Queenslander, who will sit out the upcoming US Open in consideration of safety for herself, her team and her family.

While she’s yet to decide whether she’ll travel to Paris to defend her French Open title in September, the Australian Open 2020 semifinalist is clearly thinking in the longer term.

Asked for her thoughts on the staging of her home Grand Slam in 2021, Barty commented: “The home of the Australian Open is in Melbourne and I’m sure they’ll do everything possible to play in Melbourne.”

In the meantime, Barty is delighted to spend some time on court in Cairns, where she will join Millman, Cabrera and Smith in a special event to launch the new roof at the Cairns International Tennis Centre tomorrow.

“I’m very excited. I actually haven’t played up here as a professional, so it’s going to be nice to see the brand-new roof over the gorgeous courts,” said Barty.

“I’ve never heard a bad thing about the Pro Tour up here in Cairns and I think it’s a great initiative to be able to bring more people to come to Cairns and almost create that awareness that this is a hell of a tennis centre, a great place to play and professionals want to come here and play.”

Preparing to take to the court tomorrow, Barty’s tour-mates were equally excited to spread some goodwill in the Cairns tennis community.

“I’ve got a few nieces and nephews (and) this is what tennis is about in my opinion. I remember the joy the game gave me when I was a little kid,” said world No.43 Millman.

“(With) Ash, Lizette (and) JP, hopefully we can inspire the next generation to pick up a racquet and introduce them to a game that has taken us many places.”