After soaring to new career heights early in 2020, Maddison Inglis is picking up where she left off at the UTR Pro Tennis Series. 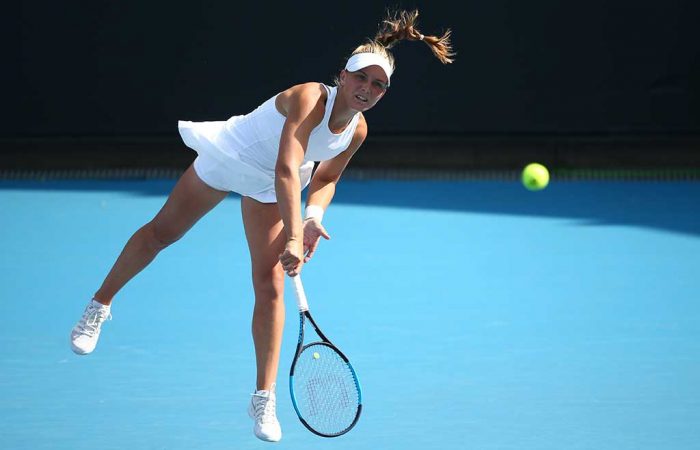 Professional players could be forgiven if time were required to regain the momentum they’d established before the shutdown created by the COVID-19 crisis.

But Maddison Inglis has picked up virtually exactly where she left off, the 22-year-old winning back-to-back finals at the UTR Pro Tennis Series in Brisbane to continue some stunning results in the 2020 season.

Claiming consecutive Australian Pro Tour titles in Burnie and Perth, Inglis was the winner of 10 straight matches in February.

Defeating American Sachia Vickery in the former and Victorian Destanee Aiava in the latter, Inglis climbed to a career-high world No.112 ranking.

It followed a breakthrough 2019 season for Inglis, who compiled a 61-22 win-loss record on the ITF Tour. “My goal was to win a 25k (tournaments) and I won three. It’s pretty crazy. It’s been an unreal year,” she said after lifting trophies at events in Hong Kong, Cairns and Bendigo.

An earlier move from her home state of Western Australian to set up a training base in Brisbane – the hometown of tennis-playing boyfriend Jason Kubler – was clearly a positive turning point.

“I don’t think I had a key thing that changed, but I’m so grateful to be training in Brisbane and I’m lucky that Tennis Australia lets me train at the Academy there and I love it,” Inglis related.

“(There’s) so much great support. So many good friends. I think that’s really helped me training there,” she said. “I think when you’re enjoying it, you’re playing harder and you’re competing better.”

Certainly that’s been true in Inglis’ return to competitive tennis at the UTR Pro Tennis Series in Brisbane, where Inglis saved a match point against Cabrera to win the first final two weeks ago.

Underlining her ability to thrive with more match play, Inglis was a 7-6(6) 6-3 winner over Cabrera in last week’s final.

“It’s always a tough match with Lizette – she’s obviously a really good player and we’ve both been playing well and doing well the last year or so,” said Inglis.

“I think I’ve been lucky the last couple of times to get over the line.”

Now a winner of six straight matches at Pat Rafter Arena, Inglis’ form is particularly impressive given the disruption created by the global pandemic.

Early in the tour shutdown Inglis and boyfriend Kubler isolated in Perth, before returning to Brisbane to resume their training.

“I really enjoyed some time in Perth. It was a huge six to eight months for me, and it was a lot of matches and travelling, so to get that time at home was really special,” said Inglis.

“I think I found a good balance between keeping up my training and staying fit staying healthy, and also having some downtime, to hang out with my family and do the things that we don’t usually get to do when we’re on the road.”

As she focused on new activities including yoga, Inglis also benefited mentally.

“(I was) just trying to work on a lot of the fitness aspects, since we had so much extra time, and the mental side as well,” she related. “A lot of people were pretty upset with everything that’s going on so I just tried to do little things like that for my wellbeing.”

The benefits of that balanced approach will no doubt continue to show as Inglis returns for the third UTR Pro Tennis Series event in Brisbane.

With a Universal Tennis Rating of 12.32, Inglis is this week seeded third behind Cabrera (UTR 12.45) and Priscilla Hon (UTR 12.35) and meets Olivia Gadecki in her first round-robin match tomorrow.

Inglis is delighted with the valuable match play she’s gained at the UTR Pro Tennis Series. “I’m surprised I think about the level that’s been out there at the moment,” she commented.

“I’m really enjoying it and I think we’re all really grateful to be able to play matches and to kind of see what we need to work on and to earn some money at the same time is amazing.”

It also creates a valuable stepping-stone for another career milestone, with Inglis’ No.114 ranking ensuring direct entry into the US Open, which is scheduled to begin on 31 August.

“It’s so amazing,” she said. “It’s obviously weird circumstances, and it’s going to be pretty different to a normal Slam, but I mean, it’s a main draw of a Slam so it’s an amazing opportunity.”