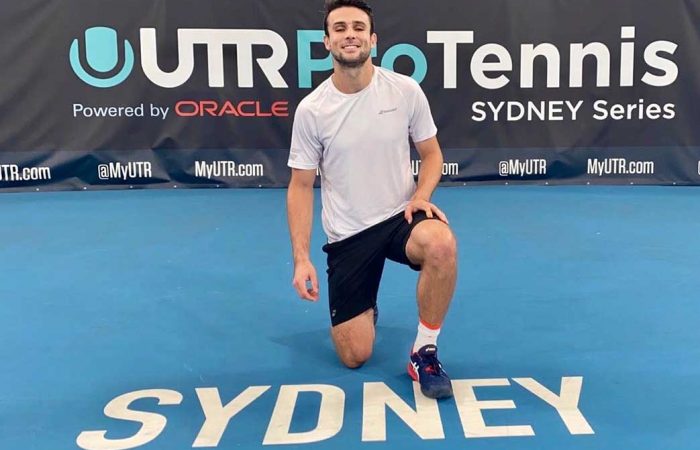 After his months-long break from professional tennis, Aleksandar Vukic was itching to return to a competitive environment. The 24-year-old did so superbly in the third UTR Pro Tennis Series event in Sydney, with a fourth consecutive match win including today’s men’s final.

“It was good to get back on court to be honest and just play the matches,” said Vukic, following a 6-4 6-3 win over Max Purcell in the decider.

“I played him a few weeks ago and he got me there. It was just good to get into the match mentality.”

With points like this one, Vukic defeats Max Purcell 6-4 6-3 in the #UTRProTennisSeries final 👏 pic.twitter.com/0sv1yegMeN

The one-hour 11-minute victory was a convincing performance from the 24-year-old, who was pleased to emerge the winner in a rematch of the first UTR Pro Tennis Series Sydney final. On that occasion almost two weeks ago, Purcell claimed a 6-4 6-4 victory.

“I think they were pretty different matches. I maybe changed a few things up. It was a bit slower today and I was able to get into more of the service points, which was possibly the main difference,” Vukic related.

“He served quite well in that first match and that was pretty much it. He’s a great player and there’s not much between us, but I got him today.”

Also enjoying wins this week over James McCabe, Rinky Hijkata and Cameron Green, Vukic was particularly pleased to regain his feel for the competitive setting.

“I’m honestly glad to be back on court and doing what we love to do,” said Vukic. “That’s our job, so it’s good to be back out there.”

Marking the longest period that Vukic has spent at home since he was a 17-year-old, the Sydneysider conceded that time at home with parents Ljiljana and Rad, plus his older brother Vladimir, had been valuable.

“It’s really good to be back,” said Vukic, who lives within a short drive of his main training venue of Sydney Olympic Park. “But I’m really quite ready to be out and about again.”

A graduate of the University of Illinois, where he combined his tennis development with gaining a finance degree, the hardworking Vukic particularly values the opportunity for match play after months of less structured training than usual.

“The body was in a bit of shock that’s for sure,” laughed Vukic, who sat out the second event in the UTR Pro Tennis series with a slight injury.

“But it held up very well for the third one so hopefully it will be fine once the season gets back and running.”

A fighting win for Destanee

With back-to-back wins in the UTR Pro Tennis Series events she’s contested in Melbourne and Sydney, Destanee Aiava also has a newfound appreciation for her competitive opportunities.

What a win for Destanee Aiava in the third #UTRProTennisSeries women's final in Sydney. After an epic match tiebreak, Aiava emerges a 7-5 0-6 15-13 winner over Ellen Perez 💪 @MyUTR pic.twitter.com/1oOtwfZ0N0

“From my end I was playing pretty ugly tennis, but it always feels really good to get through those kinds of matches and just staying strong mentally, always moving on to the next point,” said Aiava after a battle that extended almost two hours.

“I feel like I did pretty well to get through that match and not focus on how bad I was playing and just to stay resilient and keep going.”

There was also a match point saved when Perez gained a 13-12 advantage. “It was pretty long,” Aiava laughed. “I was just trying to tell myself to not be hesitant and just play to win every point.”

Also a straight-sets winner over Alexandra Bozovic and Valentina Ivanov this week, the fighting finish reinforced the Melbourne-born Aiava’s decision to recently return to Sydney.

Coach Nicole Kriz and Aiava’s partner are both located in the New South Wales capital, which she describes as a second home. “I feel really good … I just love it here,” she commented.

The world No.198 has approached her return to competitive tennis with similar gratitude.

“I didn’t realise how important it was for me to just compete consistently because this is our livelihood – we don’t earn much money outside playing tournaments,” said Aiava.

“I just found a newfound appreciation for being able to compete and also being healthy. Especially being from a really great country as well. We have so many opportunities here.”

And as Aiava, like all players, awaits the resumption of international events, she is especially appreciative that tennis has resumed in Australia.

“I’ve enjoyed competing again and feel grateful for Tennis Australia and the UTR for being able to put this event on for us and to be able to work again,” she related.