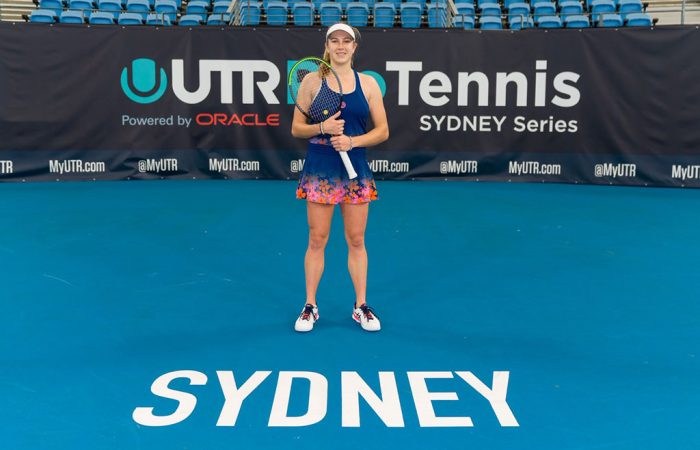 When the international tennis tours shut down in March due to the COVID-19 pandemic, Ellen Perez and Max Purcell were each determined to maintain both a positive attitude and a firm commitment to their ongoing tennis development.

The Australian players were rewarded for that professionalism today when they were crowned the respective men’s and women’s champions of the inaugural UTR Pro Tennis Series event in Sydney.

“I’m very happy. I think what pleases me is that I grew with each match and I started a little bit rough in the first match and I think over time, I started to improve my shot length and rally. Everything just slowly improved,” said Perez, following a 6-4 6-4 win over Alexandra Bozovic in the women’s final.

“A couple of times I was actually losing some of the matches and in an uncomfortable position. I was able to find a way out of it. So yeah, I think for the week, it’s (satisfying) just getting those wins under my belt and getting through those couple of challenging times.”

Also a straight-sets winner over Lisa Mays on Sunday and Taylah Lawless on Monday at the inaugural UTR Pro Tennis Series event, Perez demonstrated her proven ability to keep a level head in the most difficult circumstances.

While committed to her tennis, the laid-back 24-year-old equally appreciated the importance of maintaining a positive attitude during the recent tour shutdown.

“I’ve always been a very laid-back, chilled out person and I know that times like this, with so many changes, it can be hard to adapt,” Perez admitted. “For me it’s just going with the flow. I think that’s been my recipe. I know that it’s harder for some people to do that than others.”

It was a similar story for Purcell, who defeated Aleksandar Vukic 6-4 6-4 in the men’s final to complete a successful week in Sydney. “It’s good to know that all the training I’ve been doing in this extended period has been, I guess, paying off,” said the 22-year-old.

Also a straight-sets winner over Jordan Smith and limiting top seed Christopher O’Connell to just one game in the round robin stages of the UTR Pro Tennis Series Sydney, Purcell was particularly pleased with the fitness levels he continued to build in the shutdown period.

“Today I was most pleased with my movement. I thought I moved really well and I’ve been doing a lot of running with my brother,” said the Sydneysider after the final.

Translating that effort into actual match wins was deeply satisfying for Purcell, who appeared on track for a breakthrough season when he qualified to make his main draw singles debut at the Australian Open and was runner-up in the men’s doubles final with Luke Saville.

“It’s just hard to know how your training’s going if you don’t put it into match work to see if it’s paying off or not,” Purcell said of this week’s return to professional tennis.

“It is nice knowing there’s a couple more events held across the states and hopefully I can use this good form to go into the next few. It is a positive thing definitely knowing that my training block has kind of paid off.”