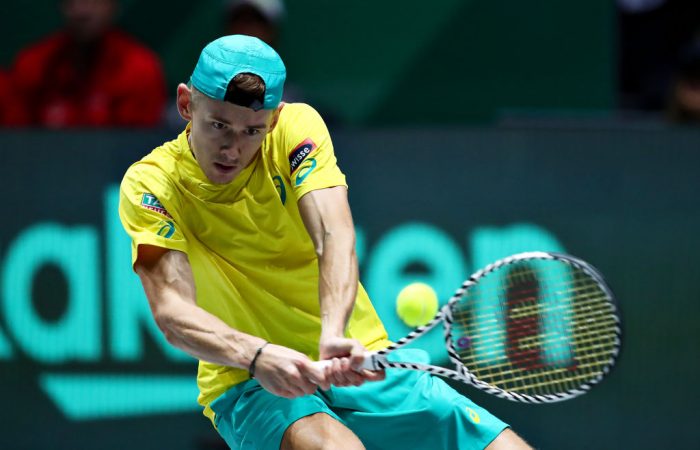 Alex de Minaur will represent Australia at the Davis Cup qualifier against Brazil in Adelaide next month, as his tennis comeback continues after being sidelined with an abdominal injury prior to the Australian Open.

World No.25 De Minaur will reunite with world No.23 team mate Nick Kyrgios and aims to reignite the passion they both displayed when representing Australia at the ATP Cup in January.

“I’m feeling great and looking forward to getting back on court with all the Aussie team,” De Minaur said.

“It’s always an amazing opportunity to represent your country, and we had a pretty good start to the year in Brisbane and Sydney at the ATP Cup. All the boys did an amazing job and it will be great to get back together and hopefully get the win over Brazil.”

John Millman and Jordan Thompson have been named in the five-man team, along with 28 year-old James Duckworth who will make his Davis Cup debut after hitting a career-high ranking of world No. 71, and winning the ATP Challenger in Bengaluru, India this month, his fifth title in the past year.

The right-hander, who achieved his previous career high ranking of world No. 82 in April 2015, has returned to career-best form after overcoming several injuries throughout 2017 and 2018.

In 2019 he led the ATP Challenger Tour stats with 49 match wins, and he won four titles from six finals.

“I’m really excited and honoured to be selected. Getting the opportunity to represent my country is extremely special and is something I will always remember,” Duckworth said.

“I’ve been part of a few ties before and I love the lead up week. Being able to train and spend time with all the boys as a team is always a lot of fun and I can’t wait to get to Adelaide.”

“We’re pleased we can field such a strong team for the Davis Cup tie against Brazil especially with Alex de Minaur back to full health after his injury during the summer,” Australian Davis Cup captain Lleyton Hewitt said.

“Nick Kyrgios, John Millman and Jordan Thompson have shown over the past couple of months they are competitive with the top players and it’s great to see them continue to produce results.

“And we’re delighted to select James Duckworth as part of this team. Ducks has had a long, hard road but his form in recent weeks and in the past 12 months has been impressive.

“We couldn’t be happier to give him this opportunity he’s worked so hard for.”

“On the back of the Adelaide International last month, and a packed calendar of events in February, it will be terrific to welcome the Australian and Brazilian teams to Memorial Drive next month,” Marshall said.

“I know the fans are already excited about seeing Australia’s best men’s players go into battle for their country.”

Twenty-five-year-old Thiago Monteiro is Brazil’s highest ranked singles player at world No. 88 and Marcelo Melo and Bruno Soares are seasoned doubles players ranked No.8 and No.24 respectively. The Brazilians are yet to announce their team.