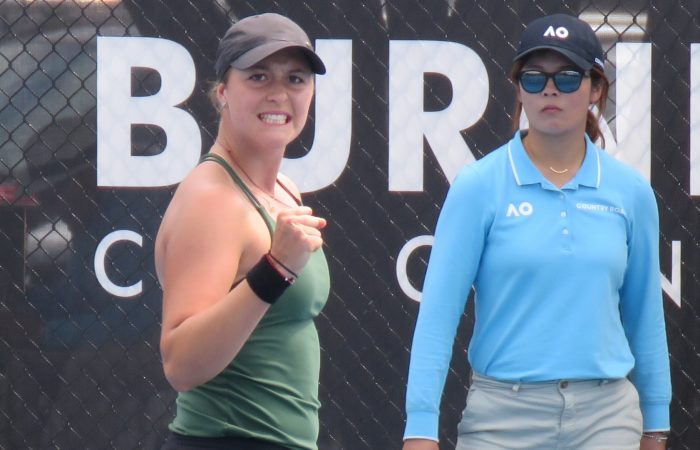 Wildcard Ivana Popovic has continued her impressive streak at the Caterpillar Burnie international, reaching the semifinals with a spirited three-set victory.

The Sydney teenager earned her maiden top 100 win in the opening round, ousting top seed

Sara Sorribes Tormo of Spain, and followed that up with consecutive wins over Japanese opponents, on Friday defeating Chihiro Muramatsu 7-6(5) 4-6 6-4.

“I knew if I was mentally there, nothing else was stopping me,” Popovic said of the first-round victory.

“I’ve got another opportunity to do better, to learn more I guess,” Popovic said.

West Australian Maddison Inglis also advanced to the semifinals with an impressive 6-4 6-4 win over Abbie Myers. She will need to surpass world No.95 Paula Badosa of Spain, the second seed, to reach the final.

In men’s action, Queenslander Jason Kubler is the only Australian left in contention after  he claimed another fighting three-set win, this time over China’s Zhe Li (No.12). The 26-year-old has now set up a semifinal clash with tenth-seeded German Yannick Hanfmann.

South Australian Alex Bolt, the No.4 seed, was unable to take his place in the semfinals, going down to Brit Jay Clarke (No.6). After snaring the opening set, Bolt fell 4-5 7-5 6-2, leaving Clarke to play top seed Taro Daniel of Japan for a finals berth.