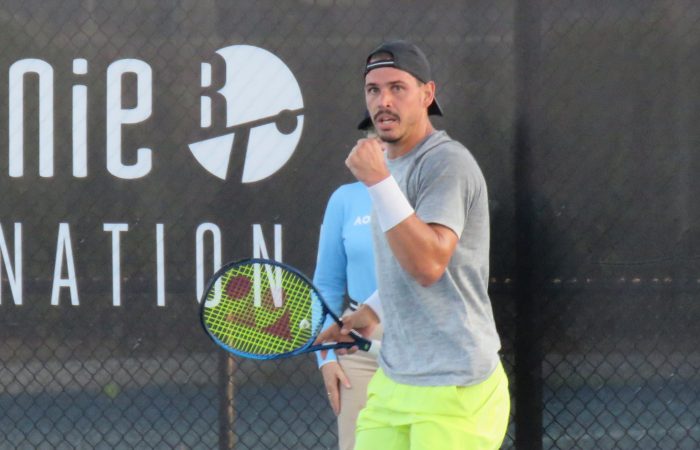 Alex Bolt eased his way to the quarterfinals at the Caterpillar Burnie International with a straight sets win over Korean No.14 seed Duckhee Lee on Thursday.

After running current Australian Open semifinalist Dominic Thiem to a fifth set at Melbourne Park last week, the South Australian continued to cruise in Burnie, taking the match 6-3 6-2 to set up an encounter with Brit Jay Clarke, the No.6 seed.

“It is tough coming from a packed-out Melbourne Arena,” Bolt, 27, said. “I just try to go about my business, try and compete for every point. That sort of takes me away from whatever the stage is.

“Where my ranking is now, it gives me the opportunity to fight for main draw Slams, but most of the year I’m on the Challenger grind and playing in smaller places around the world.”

Currently sitting at world No.140, Bolt feels well-placed to push forward this year.

“I feel like I’m a completely different player now,” he said. “I’ve evolved in so many ways. I’m fitter, I’m stronger, I’m mentally more engaged. Especially this off-season, I’ve put in a lot of work, and it’s already showed in the first month.”

Jason Kubler also continued his winning ways. In the longest match of the tournament thus far, the Queenslander prevailed in a three-and-a-half-hour match against Slovenian Blaz Kavcic. He next faces China’s Zhe Li who defeated fifth seed Lorenzo Giustino of Italy.

Top seed Taro Daniel of Japan continued his good form with a straight sets victory and is now set to play Egyptian Mohamed Safwat in their quarterfinal.