Australian Open: Millman wins through into second round

John Millman sees off dangerous Frenchman Ugo Humbert to take his place in the second round of the Australian Open. 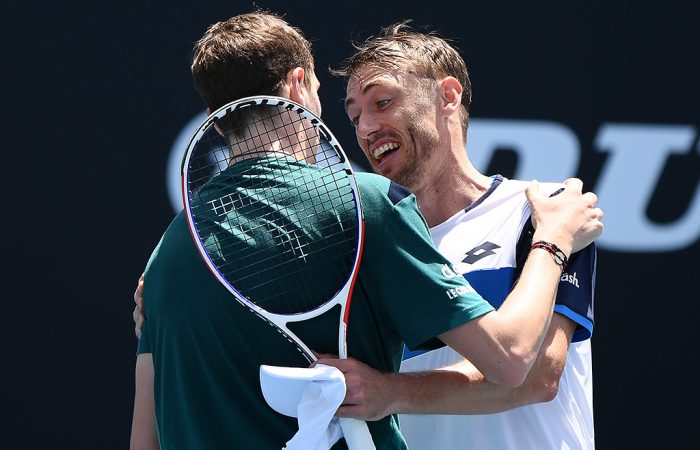 John Millman remains on course for a Grand Slam rematch with Roger Federer after downing Frenchman Ugo Humbert in the opening round of the Australian Open.

The Australian won 7-6(3) 6-3 1-6 7-5, with Humbert losing his nerve in the final game, serving two consecutive double faults to end the match.

Millman’s second-round opponent will be Poland’s No.31 seed Hubert Hurkacz, who fought back from two sets down to beat Austrian qualifier Dennis Novak.

Were he to win that encounter, Millman’s likely third-round opponent at Melbourne Park would be 20-time major champion Federer, whom the Australian famously ousted in the the round of 16 at the 2018 US Open.

“It would be nice to have another encounter with Roger, but I’m under no illusion, this next match is going to be an absolute tough one,” said Millman.

“(Hurkacz) is someone that we’re going to really start … remembering his name because he’s exponentially improving at a massive rate right now.

“He’s one of the ones you’re going to be seeing on your screens deep in tournaments well into the future. It’s going to be an extremely tough match tomorrow.

Currently on court are Marc Polmans, Jordan Thompson and James Duckworth, who are hoping to join Millman in the second round.

Sinner was on the brink of victory, leading by two sets to love, when heavy rain interrupted their first-round clash on Monday afternoon.

When play resumed under clear skies on Tuesday, the Italian needed only a few more minutes to close out the 7-6(2) 6-2 6-4 win against Purcell, who had advanced to the Melbourne Park main draw through qualifying.