Delighted to kick off her 18th Australian Open singles main draw campaign on Monday, Sam Stosur is also buoyed by the success-breeds-success mentality among Australian women on tour. 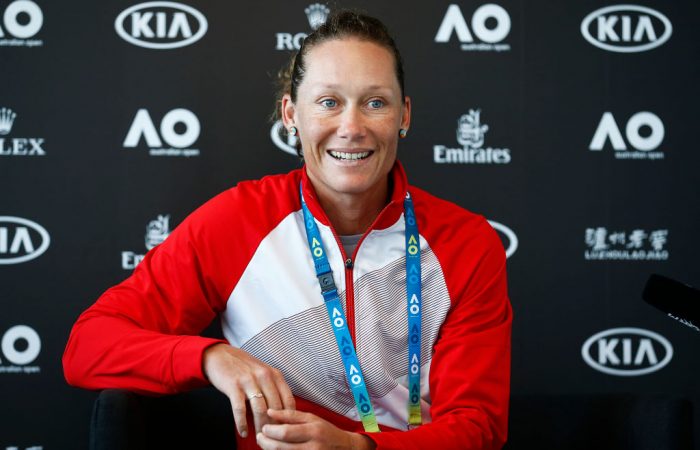 In an era when 30-something superstars are striving for tennis records that once seemed unimaginable, longevity has become a common theme in the sport.

But few players are doing it as well as Sam Stosur, who will kick off an 18th Australian Open main draw singles campaign on Monday.

“That’s obviously quite a lot of Aussie Opens and there’s another year in there that I missed through illness but yeah that’s quite remarkable,” said the 35-year-old Queenslander ahead of her first-round assignment against American qualifier Catherine (Caty) McNally.

“I love the fact that I can still be out here playing in the main draw, obviously in the dubs as well. I get to do it at least one more time, so that’s a really exciting prospect for me over the next couple of weeks.”

Recording her best Australian Open results by reaching the fourth round in 2006 and 2010, the 99th-ranked Stosur can reasonably target new highs in her home Grand Slam.

Kicking off her season with an upset win over AO 2016 champion and former world No.1 Angelique Kerber in Brisbane, Stosur is a rejuvenated force after almost two decades on tour.

STOSUR UPSETS KERBER IN BRISBANE.@bambamsam30 scores her first win over Angelique Kerber in almost five years, beating the three-time Grand Slam champion 7-6(5) 7-6(4) in the first round of the Brisbane International.@BrisbaneTennis | #GoAussies #BrisbaneTennis pic.twitter.com/7J83qJCuh5

It’s a reality that’s helped, she related, by work with strength and conditioning coach Matt Corridas, along with a relatively new coaching partnership with Rennae Stubbs.

“She obviously knows my tennis very well. We’ve been trying to work on a couple of specific things, still trying to improve in all different sorts of ways,” said Stosur.

“She’s got really good energy so it’s exciting being on a court practising with her and then in matches being able to feed off all of that as well. One of the big reasons I asked her to help me out is because of her knowledge of all the other players.

“She knows what it feels like to be playing a big match or those emotions that obviously always come with playing big tournaments or good moments.”

Stosur is also a positive influence to other players, the 2011 US Open champion spending time with Astra Sharma, Priscilla Hon and Kimberly Birrell in the Fed Cup environment and training with several young countrywomen during the off-season. She also  partnered with Ellen Perez and Lizette Cabrera in doubles this summer.

With Ash Barty leading a group of 12 Australian women inside the world’s top 250, Stosur is delighted by the success-breeds-success mentality among the increasingly influential group.

“Obviously Ash is doing her thing and it kind of speaks for itself, with what she’s able to do for Australian tennis, which is fantastic. We’re all trying to catch her and keep up and ride along that wave with her, which is awesome,” said Stosur.

“But I think the next group down – say (ranked) between 120 odd to 250 – there’s a whole group of girls in that section that are doing everything they can to get obviously (into the) main draw of Slams.

“I think because there is such a big group of them that they’re really pushing each other along to get better and better because you don’t want to get left behind.

“It’s going to be great to see how they all progress because there’s a lot of good players who will be coming through. Just like Lizette (Cabrera) playing in Hobart, she had some great wins and went down in a close one in the quarterfinals, so seeing someone like her be super competitive, win matches in the main draw is awesome.”

Equally pleasing for Stosur – a popular recipient of the Spirit of Tennis Award at the 2019 Australian Tennis Awards – is the positivity that exists among those countrywomen.

“They’re a great group so we want to see those types of girls succeed … they get along well and have such good camaraderie between them all so yeah, it’s nice to see.”

It’s one of many positives for Stosur in her 18th Australian Open, the Queenslander also buoyed by returning to Melbourne Park as a defending champion after claiming the AO 2019 women’s doubles title with China’s Zhang Shuai.

“That was fantastic for Shuai and myself, that was a big highlight of 2019,” beamed Stosur.“To win a title at home was incredible.

It’s nice to be coming back to a tournament where last year I left with fantastic memories.”