Sam Stosur has won the Spirit of Tennis Award at the Australian Tennis Awards for her outstanding leadership and professionalism, as well as her positive impact on the sport in Australia. Monday night saw the presentation of the Spirit of Tennis Award to Grand Slam champion Samantha Stosur at Australian Tennis Awards in Melbourne.

Ten years after becoming the first recipient of the Newcombe Medal, Stosur was presented with an award recognising an individual who has personified the essence of leadership, passion, sportsmanship, goodwill and dedication to the sport while making a major contribution to the stature of tennis.

Presented by long time former coach David Taylor, alongside Tennis Australia Chair Jayne Hrdlicka, 35-year-old Stosur was honoured for her outstanding leadership, incredible professionalism, and the positive impact she’s had on the sport throughout her career.

“Sam has genuinely remained unchanged and unaffected by all her success,” Taylor said. “I cannot recall a single training session in the almost eight years we spent together where she did not give 100 per cent.

“It’s a testament to Sam’s character that she has enjoyed longevity at the pinnacle of the game. A multiple Grand Slam champion, Sam joins the ranks of Australian tennis greats and is a terrific role model for any aspiring player.” 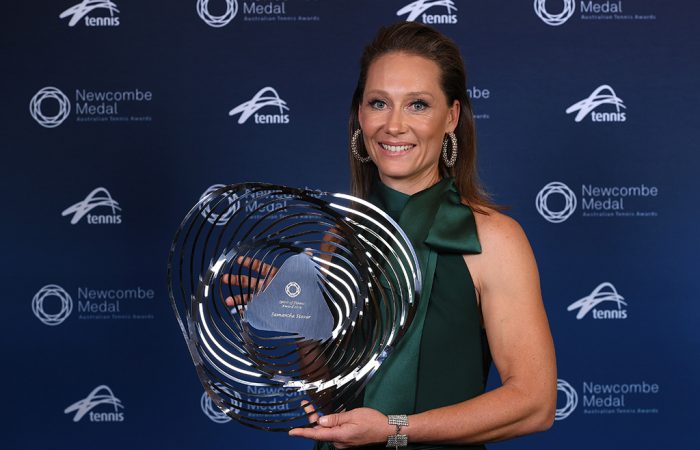 Stosur was pleasantly surprised, and genuinely somewhat speechless, when accepting the award.

“This is a big surprise — I was not expecting to get up here again tonight,” said the former world No.4, who earlier in the evening had been honoured on stage as part of Australia’s Fed Cup team which reached the final.

“Thank you Dave for what you said — that was absolutely lovely.

“Like I’ve said many times, I’m very fortunate to be able to do this for a living and I’ve loved almost every minute of it (smiling). But it’s brought me so much.

“I really don’t know what to say, I’m actually really blown away (laughter). This is a special thing for me and I’ve had a fantastic career.

“Many people have been a part of that, from coaches and strength and conditioning, physios, friends, family; it’s certainly something that you can’t do by yourself, and without that support around me there’s no way I’d be standing here still being able to do this.”

Longevity is a word increasingly associated with Stosur, who 20 years after turning pro in 1999 completed her 16th straight top-100 season (finishing the year at world No.96).

Of active players, only Serena Williams has ended more consecutive seasons inside the world’s top 100.

By reaching the Guangzhou singles final in September, Stosur has now appeared in at least one WTA final 11 times in the past 12 seasons.

Her season was highlighted by her doubles renaissance, capped by victory at the Australian Open with Zhang Shuai — her first Grand Slam women’s doubles title in 13 years — and a return to the top 10 for the first time since 2007.

She continued to represent her nation proudly in Fed Cup, helping Australia into the final with a thrilling doubles victory alongside Ash Barty against Belarus in April, and being selected for her 32nd tie in November’s final.

Barty was glowing in her assessment of Stosur’s impact ahead of that Fed Cup final against France in Perth.

“I don’t think I’m leading the way at all — I’ve got someone sitting next to me right here who has done that for so many years and has been at the very top of our sport,” Barty said in answer to a question about being the spearhead of Australian women’s tennis.

“Sam’s paved the path for all of us; we’ve all grown up watching her, we’ve had the privilege of playing with her, playing against her and I think I’m just doing my best to run off that.”