Continuing an impressive start to 2020 on home soil, Ajla Tomljanovic progresses to the second round of the Adelaide International. 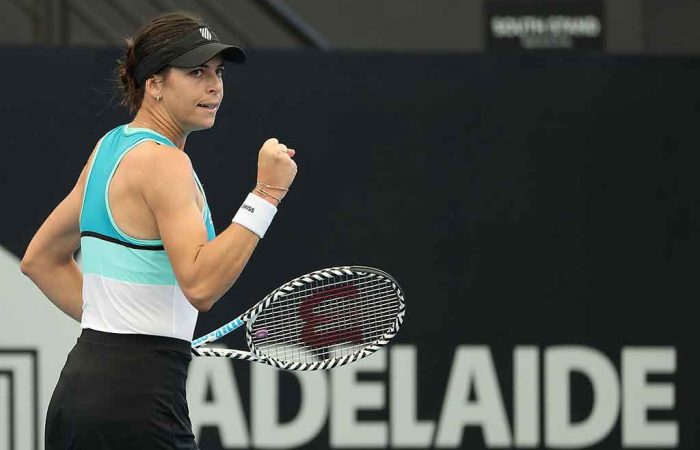 Ajla Tomljanovic has capitalised superbly on a wildcard at the Adelaide International, the home favourite outclassing Yulia Putintseva 7-6(4) 6-2 to set up a second-round clash with reigning Wimbledon champion Simona Halep.

Drawing on her powerful game to claim victory in just under two hours, Tomljanovic also relied on a steely mindset as she saved set points in the opening set to triumph against her higher-ranked opponent.

The 52nd-ranked Queenslander explained how the support of the Adelaide crowd helped secure victory over the world No.37 from Kazakhstan.

“It’s so special (playing at home). I come out every time here and I think to myself, ‘wow, if I had this every week of the year, maybe I would have the best year on tour’,” said Tomljanovic.

“But we don’t, so I try to cherish every match I get in front of you guys. You guys are one of the best crowds, so I’m just so happy to get as many matches as I can.”

Tomljanovic clawed back an early break to force the first set to a tiebreak and twice exchanged breaks with Putintseva early in the second set. She ran away with the last three games to secure victory.

“I think there was a lot of rhythm today actually,” said the Australian. “We know each other pretty well. We do our off-season at the same place, so we had a couple of practices in December, so we both knew what to expect, and I was ready for a big battle.”

Following a strong start to the 2020 season in which she stretched world No.2 and eventual champion Karolina Pliskova to three sets in Brisbane, Tomljanovic relishes eagerly awaits another tough battle with Halep.

“(It’s) not too easy,” Tomljanovic admitted of her world No.2 opponent. “(But) I’m ready for it, and I’m just happy to have another chance.”

While she is yet to defeat Halep in two meetings, Tomljanovic pushed the former world No.1 to three sets in both of those encounters – most recently in the first round of the 2019 French Open.

De Minaur out of Adelaide

The news was less positive for Australian men’s No.1 Alex de Minaur, who withdrew from the Adelaide International with an abdominal strain.

“Obviously I am not in the happiest mood,” said De Minaur, who starred at last week’s ATP Cup with wins over Denis Shapovalov and Alexander Zverev in the round-robin stages, and pushed world No.1 Rafael Nadal to three sets in the semifinals.

Really sorry I wasn’t able to play in Adelaide as I was really looking forward to it. 😓😓 @AdelaideTennis https://t.co/qeQZy2jgoQ

“But it’s something that happens … I have just got to do whatever I can to make sure my body recovers.

“And right now my sole focus in on making sure I recover for my next one (tournament).”